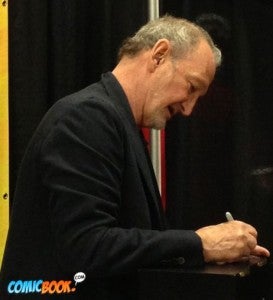 Sometimes Star Wars scoop comes from the most unusual of places. Robert Englund, who is best known for playing Freddy Krueger in the Nightmare on Elm Street series, is good friends with and even a former roommate of Mark Hamill, who played Luke Skywalker in the Star Wars series. While appearing at the Nashville Comic Expo, Robert Englund talked about how both he and Hamill have done a lot of voice work for animation. He also let slip out a big secret in regards to exactly what Hamill is up to currently. "Mark now—they've got Mark in the gym, because Mark's coming back as Luke Skywalker. They've got him doing his sit ups," said Englund. As a close friend of Hamill, it certainly makes sense that Englund would be in a position to know more than the average person. Back in April, Carrie Fisher mentioned at the Calgary Comic and Entertainment Expo that Disney was sending a trainer to her house to help her get in shape, but Hamill has never publicly confirmed anything along the same lines. Englund's comments are the first indication from a source close to Hamill that the actor is  currently in training to reprise his role as Luke Skywalker in "Star Wars Episode VII." "Star Wars Episode VII" is scheduled to be released in movie theaters in the summer of 2015.