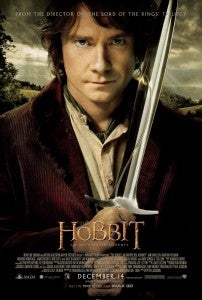 Peter Jackson has just posted the photo at right to his Facebook page, with the caption, "The Hobbit: An Unexpected Journey poster." The poster features Martin Freeman, known in the U.S. as the star of the original BBC series The Office and the American film adaptation of The Hitchhiker's Guide to the Galaxy. Freeman plays Bilbo Baggins, the lead character, who was played by Iam Holm in the Lord of the Rings trilogy and reportedly will be again in bookend segments, alongside Elijah Wood's Frodo. The release, of course, comes on the 75th anniversary of the publication of J.R.R. Tolkien's novel The Hobbit, upon which the upcoming trilogy of films by Lord of the Rings director Peter Jackson is based. Throughout the week, Warner Bros. (who are distributing the films) have been premiering new content related to the first film, which lands in theaters on December 14. A batch of production photos were released on Monday, followed by a trailer on Wednesday.