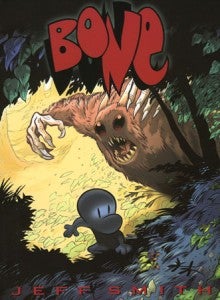 Jeff Smith's Bone, one of the most awarded and beloved independent comics of all time, has had a long and often troubled quest to get to the big screen. More than one entertainment writer has, in fact, joked about the Bone cousins having a harder time getting to the big screen than they did getting back to Boneville in the actual comics. This week, though, the process seems to have taken a massive leap forward with the naming of Greek and Supernatural writer Patrick Sean Smith and Muriel's Wedding director PJ Hogan to the film. The Hollywood Reporter had the story early in the week, which was then picked up by Bleeding Cool. The story suggests that Smith is currently working on a draft of a script but that Hogan, who wrote an early draft himself, will have another look at it before it starts production. Bone, which ran for thirteen years starting 1991, is one of the best-selling American comics in decades--a sprawling fantasy journey that's often compared to J.R.R. Tolkien's Lord of the Rings. In addition to being a big hit in the direct market, its trade paperbacks have made waves in the bookstore market and, after being bought up by Scholastic and reprinted in color, have become popular reading for educators around the country. At one point early on, Bone was supposed to be an animated feature by Nickelodeon Studios, but it's gone through a number of transformations and changed hands a few times since then. It's unclear at present whether it will be a traditionally-animated film or use motion capture or computer graphics for its animation. It's being produced by Animal Logic, the company that brought us Happy Feet and (as Bleeding Cool pointed out) have brought us the animated-feature debuts of traditionally live-action directors including upcoming Man of Steel helmer Zack Snyder.

Writer and Director Named for Movie Version of BONE