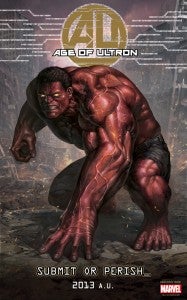 "Who will return from the Age of Ultron?" That's the question posed by a pair of newly-released teaser images for Marvel's upcoming, universe-wide crossover event. The posters feature Black Widow and Red Hulk, a pair of characters with more in common than is immediately clear; aside from their red-and-black color schemes, the two heroes both have extensive military and black ops backgrounds. In the war against Ultron, it's likely that characters like these will play a significant role. The story, which has been compared to The Infinity Gauntlet and Civil War, is said to have lasting ramifications, but many have speculated that it could either begin in an alternate reality, or be retconned into one after the heroes have to employ time travel to defeat Ultron. In any event, the villain reportedly begins the first issue having already won and taken over the world. "From the very first page, readers will see the unthinkable – Ultron has won," said Axel Alonso, Editor In Chief, Marvel Entertainment. "In a world where we've learned to depend on technology to sustain us, what would happen if one villain found a way to turn it against us? In order to survive, the world's greatest super heroes will have to make drastic choices whose ramifications will be felt throughout the Marvel Universe. This is a story so huge that we're shipping the entire ten issue series from March through June so fans don't have to wait more than a few weeks between issues." 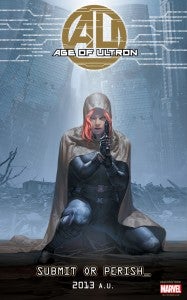 Age of Ultron Teasers: "Who Will Return"?

Naruto Welcomes One of Sasuke's Most Heartwarming Moments Yet

Latest Update on WWE's Plan for the Roman Reigns vs. Brock Lesnar Rivalry