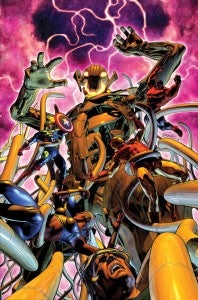 After weeks of hyping up the ending of Age of Ultron as top secret and universe-altering ,Marvel shocked comics fans earlier this week by announcing that Neil Gaiman would bring Angela--a former Spawn supporting character he created--to the Marvel Universe as part of the series' final issue. That reveal was enough to drive a ton of discussion, but apparently not a big enough ending for the series, as writer Brian Michael Bendis has clarified that it's only a small part of the story's actual conclusion. On Twitter, Bendis told fans on Thursday that "today's news does not spoil the end of Age of Ultron. Well, one part of it--but there's A LOT more going on in that issue as well." Whether that "more" could involve Marvelman, another character closely associated with Neil Gaiman, and currently owned by Marvel, is unclear. His involvement has led many fans to speculate that after years of false starts, Marvel might get something off the ground for the iconic British character, whose rights were tied in litigation for about as long as Angela's own. The publisher acquired Marvelman in 2009 but have yet to use him in any new stories.