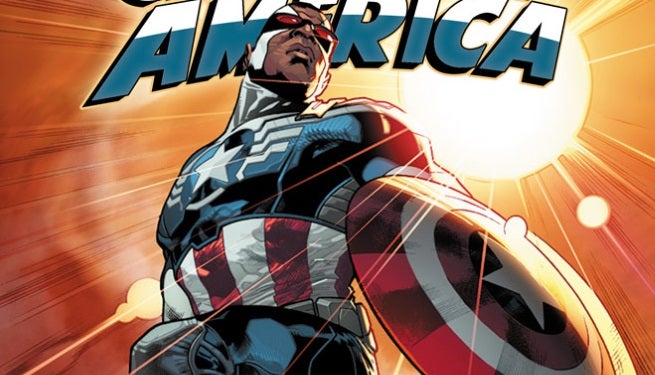 Marvel Comics has released a preview of All-New Captain America #1, starring Sam Wilson, formerly the Falcon, as the new Captain America (as initially revealed on The Colbert Report). The issue is written by Rick Remender, with art by Stuart Immonen.

Drained of the Super Soldier Serum that gave him his strength, speed and endurance – Steve Rogers is no longer fit to wield the shield. But his trusted friend and partner Sam Wilson is ready and able to take the job, with Steve’s son Ian at his side as the new Nomad.

“I’ve been having a lot of fun writing Sam,” says Rick Remender in an interview with Marvel.com. “It’s a completely different attitude. The fact that he’s not a soldier shifts thing up a bit. Sam’s not going to be Steve. Steve can be very rigid. That can be kind of joyless at times, whereas Sam is absolutely not that.”

The threat of Hydra is growing, as the terrorist band has infiltrated the Marvel Universe completely. Even worming their way into the super hero community. Anyone can be a threat, and no one is to be trusted. But what is Hydra’s ultimate goal? United by this new and more vicious Hydra, Captain America’s rogues gallery prepared to strike – aiming at the new and untested Captain America and Nomad.