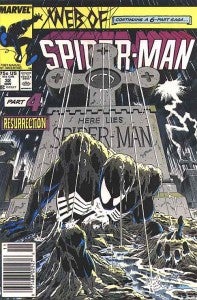 WARNING: Spoilers follow for this week's Amazing Spider-Man #700 and Avenging Spider-Man #15.1. If you haven't read those books yet, you're probably the only one--so go find them on ComiXology or something and come back to finish reading after you're done.

Despite selling out all over the country and generating about $2 million in revenue for Marvel Comics, Amazing Spider-Man #700 is not the first time poor Peter Parker has died. In fact, thanks to our amazing, spectacular friends over at Spider-Fan, we bring you a list of the times that (in the core, non-Ultimate comic books) Peter Parker has been killed--only to get better, usually in time for the next issue or so. We're not picking on Spider-Man in particular, of course--since a lot of these are the kind of death where the hero flatlines to create a compelling cliffhanger for the next issue, these are the sorts of stories you could find being told with almost any superhero with a long publishing history. Still, it's good to bear in mind when getting all a-tizzy about the death of Peter Parker that we're not exactly in unprecedented territory here. There are, of course, some deaths that are meant to seem more permanent than others and only a couple that ever seemed as though they could be "permanent" but who really cares about that when there are joked to be made?

1. Spider-Man #17 (1991) - It's not a near-death experience if you're actually in death's presence, and under her power, when she releases you back to the land of the living, is it? Saving a mother and daughter from a lethal tidal wave of freon, Spider-Man finds himself in the afterlife, where he encounters Thanos and Death; he ultimately talks Death into allowing both his spirit and the daughter's (who was not as wholly saved as the mother apparently) back to the land of the living.

2. Peter Parker: Spider-Man #71 (1995) - Right i the heart of the clone saga years, Peter Parker is admitted to the hospital with what readers assume is the degenerative disease that's been slowly eating away at and killing off clones throughout the story. A powerless Peter is wasting away in the hospital while villains are on the rampage, and Ben Reilly, as Spider-Man, stops them. At the end of the issue, Peter Parker's vital signs deteriorate and he flatlines and is "dead"--but he was back the next week, with his powers returned. Four issues later, Green Goblin killed Ben Reilly and Peter returned to being Spider-Man full time.

3. Amazing Spider-Man #398 (1995) - Lots of drama in this one; Mary Jane was pregnant and wondering what Peter's powers would bring for their child, all while Peter, still dealing with the faked return of his parents shortly before, finds himself poisoned by one of The Vulture's birds. Of all the people to come help him out, Dr. Otto Octavius shows up. It's almost like he's got a vested interest in keeping Spidey's body young, hot and healthy! In any event, before Doc Ock can come up with a suitable cure, Spidey flatlines again. He used to do that a lot in the '90s, apparently. Ultimately, though, the cure worked and Spidey recovered--which is good, becuase Doc Ock took the same cure, and also died and came back. If not for this issue, we'd be totally without a Spider-Man!

4. Friendly Neighborhood Spider-Man #3 (2006) - Hey, lookit that! Nearly ten years without dying! Atta boy, Pete--oh, wait, there he goes again. Defeated by Morlun, Spidey is rushed to the hospital and then attacked again; his crazy giant spider totem thing (I'll admit, most of this story made little sense to me) bursts out and, using the last of Peter's strength, kills and feeds on Morlun. Peter dies in Mary Jane's arms but, soon thereafter, wakes up and gets better. JMS's The Other storyline is probably the most frequently-cited death in this list because the others were self-evidently temporary while this one at least played at a sense of permanence, being as it was the climactic chapter of a big Spidey event. There were, of course, a handful of ancillary "deaths" that were theoretically in-continuity but which didn't take place in Spidey's own books and so he wasn't the focus of the story. We'll just cut and paste from the Spider-Fan index so as not to bore you with the details:

Amazing Spider-Man #700 and the Many Deaths of Peter Parker