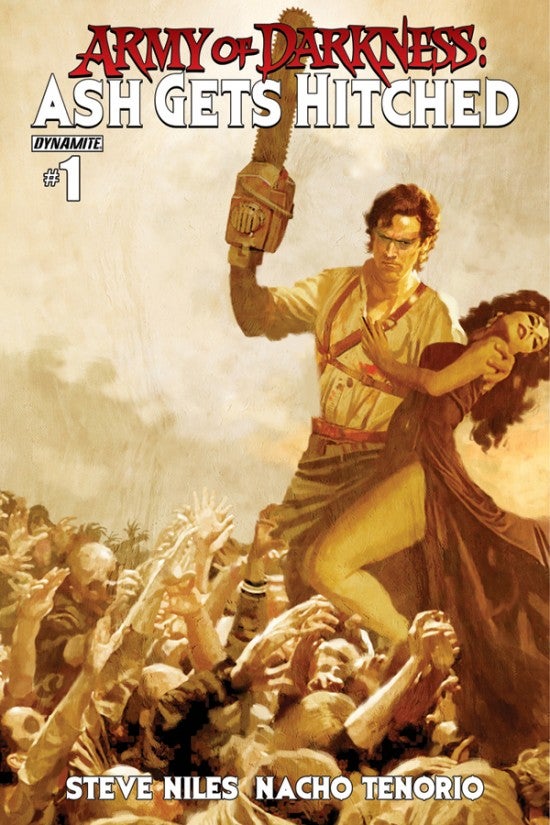 Horror movie (and comics) icon Ash will tie the knot this upcoming July in Army of Darkness: Ash Gets Hitched #1 from Steve Niles and Nacho Tenorio. The one-shot comes with a bevy of variant covers by top artists including Jae Lee, Lucio Parrillo, Francesco Francavilla, Nick Bradshaw, Arthur Suydam, and Stephanie Buscema. In Army of Darkness: Ash Gets Hitched #1, Ash and Sheila are reunited and Ash vows they will never be separated again. Can evil stop evil? This will be the question Ash has to answer, now that he has unleashed the Faceless Man on the land. "I think fans of the films will really enjoy what we're doing in Ash & the Army of Darkness," said Niles. "It was a dream come true for me to create the sequel we never got and I hope fans enjoyed reading it as much as I enjoyed writing it. Now we head into the next chapter, the marriage of Ash and Sheila. This is pretty huge for the [Army of Darkness] universe because it means Ash is going to stay in the Dark Ages and be a father and husband. It's going to be a very strange and fun trip." "Ash has always been a very important character at Dynamite, given Army of Darkness was our first book launched back in July of 2004," said Dynamite CEO / Publisher Nick Barrucci. "We've had a great relationship with MGM over the last 10 years and are grateful for their support and our ability to continue with such an iconic character and a great license. As we continue to celebrate our 10th Anniversary in July, it was very important to us that Steve Niles, someone who is an incredible talent, would be the writer of this milestone story continuing his stellar work from Ash and the Army of Darkness, and be the person to write such a defining moment in the life of Ash!" Army of Darkness: Ash Gets Hitched #1 will be solicited in Diamond Comic Distributors' May Previews catalog for release on July 9, 2014. Note: A previous version of this story inaccurately stated that the title would be released in August in the headline. The article itself remains unchanged.

Army of Darkness Star Ash Gets Hitched in July