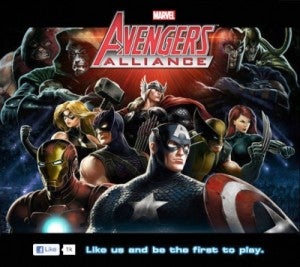 As mentioned in a previous article here, Marvel rolled out quite the roster of new games yesterday in their game panel, and while there were some pretty big surprises, another game that got a lot of attention and announcements was the wildly popular Facebook game Avengers Alliance.  The game now has over 15 million uses, according to the panel, and over 2 million people use the game almost daily.  Those are staggering numbers for a Facebook game, and the company responsible, TQ, has apparently taken to heart recent surveys they gave out to their users asking about future characters they would like to see added to the game.  The game recently added Scarlet Witch, Black Panther and Mockingbird as options.  Read on to find out which characters were announced today that will be added to the game soon, as well as new costume options for existing characters.

The new character list is strikingly full of two things: members of the X-Men and women.  The new character list includes Emma Frost, whose diamond form and telepathic abilities could give her classification as an Infiltrator or maybe even a Bruiser, and Rogue, who would certainly fall in the Bruiser class.  The male X-Men characters joining the game are Beast (Tactician or Bruiser would be my bet), Quicksilver (Infiltrator), Gambit (Infiltrator or Scrapper) and Havok (Blaster). On the side of the Avengers, Tigra will be added, and she would probably fit well in the Scrapper class and Valkyrie (another good female Bruiser).  It's no surprise that these new characters skew heavily towards these two teams, as the game will soon be adding an Avengers vs. X-Men feature with the three existing characters in the game who are part of the Phoenix Five, as well as adding Magik to boot!!

As far as the costume changes go, several of the existing characters will get new options to correspond to either their past or their present.  A yellow Daredevil costume is on the way, hearkening back to his early days, and Doctor Strange will get a New Defenders outfit, as well as Iron Fist getting one of those as well.  The members of the Future Foundation, Invisible Woman, Thing, Mr. Fantastic, and Spider-Man will get the new black and white outfits that are featured in the new series.  The X-Men will get in on the act too, with Cyclops getting a classic look as well!

More content in the future was mentioned, but no specifics at this time.  With the game catching fire as it has, keep checking back to see what other characters, stories, villains and more will be added!