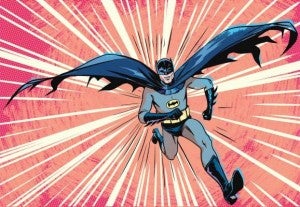 At today's DC Entertainment All Access Panel at the Chicago Comics and Entertainment Expo (C2E2), DC digital editor Jim Chadwick told the audience that it won't be long before Jeff Parker's Batman '66 comic book series introduces its first villain without an Adam West-era analog. "Jeff Parker is writing this, he was born to write it. Jonathan Case is drawing the first arc. We're working on a King Tut story, we're working on a Killer Croc story," Chadwick told the audience at the panel. He added that if Killer Croc had existed back in the time of the 1966 Batman series, it would probably be a criminal in a rubber mask, and that's the plan for the comic book version, as well.