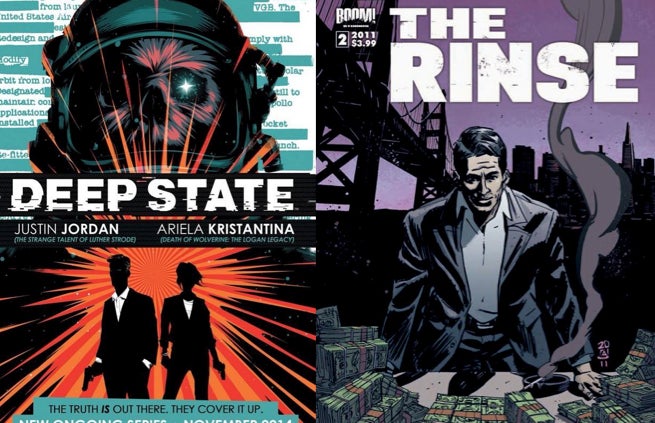 Boom! originals "Deep State" and "The Rise" are heading to the small screen, Deadline reports. "Deep State," a new comic series created and written by Justin Jordan and illustrated by Ariela Kristantina, follows an FBI agent who joins a secretive government agency that shields the world from paranormal and unexplainable occurrences. "The Rinse," created by Gary Phillips and Marc Laming, is a BOOM! miniseries about money launderer Jeff Sinclair and his unwilling involvement in cleaning up stolen casino money that tops $25 million.

Being Human alumna Anna Fricke will write "Deep State's" television adaptation, while Necessary Roughness' Mick Betancourt will pen and co-executive produce "The Rinse." BOOM CEO Ross Richie and President of Development Stephen Christy will executive-produce both series. However, Deep State will bring some serious TV muscle with Homeland Executive Producer Howard Gordon, who will also executive produce on the series.

No word has been given on when either series will begin casting or moving into production. And while a release date has yet to be given, it would seem likely that 20th Century FOX would aim for the 2015 Fall season lineup. Stay tuned to Comicbook.com as FOX and BOOM! announce more information.