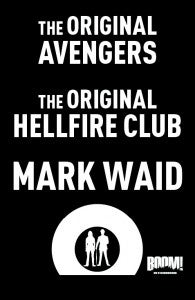 Following on the heels of a strong-selling reissue of Grant Morrison's 1980s Steed & Peel miniseries based on the BBC's spy series The Avengers, Boom! Studios appears to have gained the license to create new works based on the franchise and have issued a visual press release teasing a series featuring the characters and written by Irredeemable and Daredevil writer Mark Waid. Trading fairly shamelessly on Marvel properties, the image identifies them not only as the original Avengers but also the original Hellfire Club. The relationship between the Steed and Peel Avengers and Marvel's Avengers is a complex one, given that both of them have historically had both movies and comic books and they've often had to make accommodations for one another, such as the recent film adaptation of Marvel's The Avengers being released as Avengers Assemble in the U.K. to avoid confusion and the previous Boom! miniseries being titled Steed & Peel for the same reason.