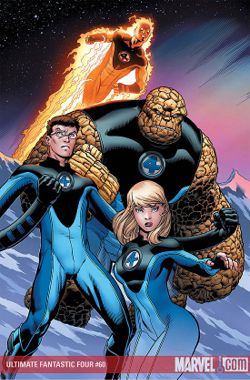 SPOILER ALERT!!! THIS REVIEW CONTAINS INFORMATION ABOUT THE LAST ISSUES OF SEVERAL COMICS SERIES. PROCEED AT YOUR OWN RISK!

Now that that's out of the way, it seems that several titles, some major and others still in the early stages, have had their plugs pulled for various reasons. Below are reviews of recent comic book cancellations and what the future may hold for these characters.

Ultimate Fantastic Four #60 - Now that this issue has finally hit the stands, Ultimatum has taken its first big title. With Reed and Johnny missing, it's up to Sue and Ben to try and save the day. Their trip takes them, Sue's mom and the Mole Man to Atlantis in search of a way to figure out just what the heck is going on with these nanobots in their bodies. Add the events of Ultimatum and everything is crazy! The issue ends with Sue and Ben getting a sense of which universe Reed and Johnny are in, but a cliffhanger is what we find. Even though this will be followed up in Ultimatum #4 and Ultimatum: Fantastic Four Requium, there's little feeling of satisfaction at the way this one ends.

When we last saw the Birds of Prey, they were under attack from Calculator in the guise of a giant techno-monster, Kilg%re. There's been a recently emerging thread with Oracle that she wasn't feeling as effective as she used to, claiming in this last issue that she let the Joker and Calculator slip through her fingers. The issue ends with the villainous Silicone Syndicate scattered or captured and with Oracle having left to, "figure some things out for her (my) self." While it is good to see the ladies triumph in the end, there's a certain depressing air about the way Barbara is handled here. She deserved better. You would think the writers would let her feel some sort of peace and pride in all that she's done over the years, but they don't. I can only assume that's because of what is being set up in Oracle: The Cure #1, but we'll see. It's not a very proud ending to a smart, action-packed book.

- While this book didn't have the long publication histories that Ultimate Fantastic Four and Birds Of Prey had, New Warriors was trying to make its way in a post-registration world. Now finding themselves stuck in the future, and confronting Donyell and Dwayne, no longer deceased, Taylor for a return home. This final issue has them fighting through armies of Iron Man robots, dealing with a battle of brothers, and hoping that they don't end up stuck in a reality where Dwayne has taken Tony Stark's place as a dictator. The issue has some pretty good action sequences and dialogue, but the appearance and death of Tony Stark feels forced and cheap. The final scene when the New Warriors return home and decide to disband is bittersweet, but perhaps they'll be reforming soon. They did get to keep the gear after all!

After a fantastic confrontation with Ra's Al Ghul in the previous issue, Nightwing closes up shop in his final issue and heads back to Gotham. There are plenty of touching and right-feeling scenes of grief, especially between Alfred and Dick. One of the best moments of this issue comes at the end, when Dick makes a trip to Crime Alley, the site of Thomas and Martha Waynes' deaths, to remind us about the mission and about the generosity of people in this world. Nightwing has sworn allegiance to Gotham and to the memory of Bruce, and it's an uplifting ending to a book that has followed the journey of a boy into the life of a man. From Robin, to Teen Titan, to Nightwing. Who knows, maybe the title of Batman won't be far behind?

This long-running title has seen many happenings for the teenage hero wearing the yellow 'R', and now it must end. Much of this issue is spent with Robin trying to track down Lady Shiva, all the while apparently making peace with what he feels is his probably impending death at her hands. After several good-byes to people such as his current girlfriend and his should-be girlfriend Stephanie, AKA Spoiler, he goes off to face Shiva in what turns out to be a surprising twist, with him getting the drop on her long before she ever arrived in Gotham. The series ends on a fitting note, with Robin sailing off into the night sky on his ropeline, thoughts of what might lie ahead dancing through his head.