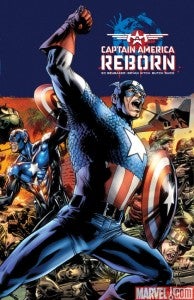 Just in time for Independence Day comes one of Marvel's biggest projects of the summer, Captain America: Reborn. With issue number one coming out today, fans of the series and those who are simply curious about how Marvel plans on executing what seemed to be certain death for the costumed patriot are in for some answers right away in this first issue, as well as an intriguing mystery. To say that writer Ed Brubaker has shaken up the world of Captain Americaover the past several months would be an understatement. With former sidekick James "Bucky" Barnes donning the costume of his former mentor, Brubaker has taken this new Cap on globe-spanning adventures that have explored new facets of the character and have touched on the backgrounds in espionage of not only Bucky, but of supporting characters such as the original Black Widow. We see more of that in this first issue of Reborn, with Natasha and Bucky on a mission to retrieve a very important piece of technology from a H.A.M.M.E.R helicarrier. Adding further to the intrigue is what exactly Sharon Carter knows and remembers from the events on the day of Captain America's death, as well as what happened during her imprisonment at the hands of the Red Skull and mad man Arnim Zola. From what we learned in Captain America #600, there may be more to the gun that she, as a brainwashed agent of the Red Skull, used in the shooting of Steve. Hints of time travel and secret pacts with Doctor Doom are mentioned here, as Sharon relays her story to Hank Pym and The Vision. Nicely and patiently unfolding, the first issue sets the stage for some major revelations over the next four issues, and we can only assume that Steve Rogers' reintroduction into the Marvel universe will have major implications for Norman Osborn, who is also given some intriguing news about Steve Rogers' fate from an unexpected villain at the end of this first issue. There are also a couple of good setups here for the following issues, namely how Natasha and Bucky plan on getting off the helicarrier after getting themselves into a tight spot, and what exactly will the Falcon, Hank Pym and Vision do with the information given to them by Sharon Carter. How will Norman Osborn handle these revelations will also be interesting, and it will hopefully have an impact on the upcoming Iron Patriot Acts that Marvel will implement this fall. Brubaker and artist Bryan Hitch continue to amaze and impress with their run on Captain America, and this first issue of Reborn is no exception. The issue avoids feeling like a gimmick and the explanations posed here for what really happened to Steve Rogers seem genuine; a further mystery awaits with what exactly the Red Skull had in mind when he began orchestrating this whole thing. Hopefully we shall learn more as this exciting limited series continues to unfold, hopefully adding more drama to the complex dynamics of the Marvel universe!