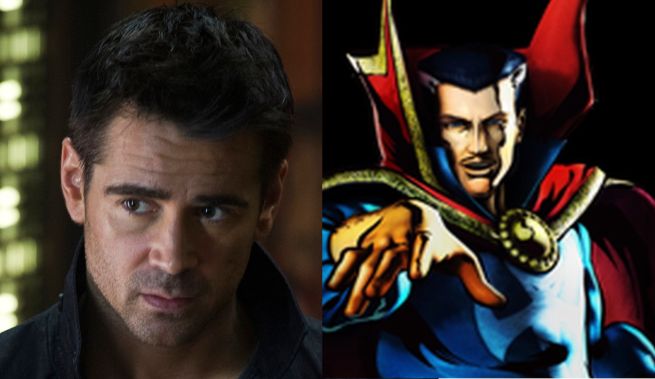 This week's chief sport at the trade newspapers of Hollywood has been adding names to a long, long list of potential Dr. Strange actors. It seems that Marvel are engaging with a whole array of possible stars, or at least their agents, and somebody is leaking this information out to the press.

The latest name to be added to the conversation is Colin Farrell. In reporting this, however, The Wrap are also saying that Benedict Cumberbatch and even Joaquin Phoenix are still somehow contenders. And then there's Keanu Reeves being considered, while Jared Leto, Justin Theroux and Oscar Isaac reportedly all want the role for themselves too.

This whole thing sounds like Marvel making a very public contract negotiation. Who exactly they're trying to convince to sign on the dotted line just isn't clear, but whoever this actor is, they're getting squeezed in the vice pretty tight.

While I'm in the mood make bets - I was ready to put $10 on Jena Malone playing Robin earlier, right about when it was all but confirmed, because that's the kind of high-stakes big-roller I am - I'll take a punt on this bit of casting too.

I think they're going to end up with Cumberbatch. That's my silver-dollar hunch. I can daydream reasons that each of the others won't fit or work out, but with Benedict C., it all just seems that little bit more possible. And he'd be good at it too, right?

Somebody will have to sign on sooner or later as production will be getting underway in the spring ahead of a July 2016 release date.