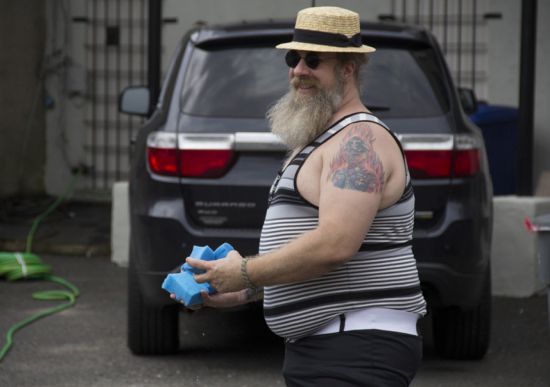 On the “Pity The Fools” episode of Comic Book Men, Walt asks the other guys at the Secret Stash if they could fall in love with a mutant. Ming points out it would be tough if it was Rogue and they couldn’t touch each other. Walt provides the example of protoplasm worm mutant that had the power to turn into any shape desired, and Ming says he could still fall in love with her. When Walt asks if he would still stay with this worm if the Brotherhood of Evil Mutants took its powers, Bryan quips that he’s not so sure the slug wouldn’t leave Ming.

A sellers brings a Mr. T’s Water War toy into the Secret Stash. Walt asks Kevin Smith if he’s every considered going into the water toy genre with his own merchandising. Smith says, “I’ve only dreamed that I could hit a place where some kid walks into a major toy store and says I want that fat, bearded man to spit water at me and my friends in the backyard.”

Walt calls in Robert Bruce to appraise the Mr. T’s Water War toy. Bruce assigns a $75 to $80 retail value for the toy. After some negotiation with the seller, Walt agrees to buy the toy for $40. Ming says he wants to go out and play with the toy, and Walt says he can if he gets all his work done today.

A seller brings in a set of nineties Marvel Trading Cards. Walt recalls collecting the trading cards with Kevin when they were in their twenties. The seller points out that he bought them when he was in the third grade. Walt brings up that the hologram foil cars were what really got him excited back in the day, and the seller pulls out some hologram foil cars locked away in plastic cases. Walt tells the seller that the Secret Stash doesn’t do trading cards at all anymore. However, Walt gives the seller some cards that they had from way back to help him fill his trading card book.

A woman comes into the Secret Stash dressed up like Aquaman. Walt points out that she is wearing a costume that hasn’t been sanctioned by DC Comics. When the woman mentions that she’s going out to party in her costume, Walt objects that she might be doing things that are not superheroic in the costume and kids might see it. Ming says not to listen to Walt that he appreciates the costume.

After work, the Secret Stash guys go outside to play with Mr. T’s Water War, and a sponge fight breaks out between Ming, Mike, and Bryan. Kevin Smith offers the parting words, “Remember kids, once you take it out of the box, it's no longer mint.”