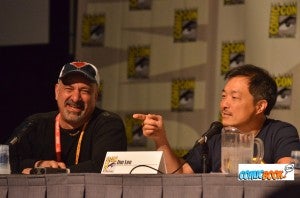 Coming to you live from the San Diego Comic-Con International, ComicBook.com is reporting from DC Entertainment's Meet the Publishers panel, where co-publishers Dan DiDio and Jim Lee are being moderated by Bob Wayne, DC's Vice President of Sales. The panel, which has become a Sunday tradition at San Diego's and New York's comic conventions, began with Wayne urging fans to donate to DC's We Can Be Heroes charity program.

Keep refreshing to be updated in realtime!

Spinning out of what Scott Snyder has been doing in Batman, of course, the panel started with Talon, by James Tynion IV. "He's this assassin who's decided to leave the fold and they're not too happy about it," Lee explained. "He's trying to have his own life independent of this organization." He joked that Tynion IV had to take the job after the first three James Tynions were killed by the Court of Owls.

Writer Christy Marx and artist Aaron Lopresti are onboard for Amethyst, which comes next on the panel. "We wanted to introduce the concept of fantasy into the DC Universe, but do it in a very contemporary way," Lee said of the title.

Of the backup feature by Tony Bedard, DiDio said, "I've made it no secret how much I love these anthology titles." "It really kind of explains some history from the emergence of Superman and the Justice League five years ago through the present day, and it does it through some of the most secretive bad-asses of the DC Universe," said Jim Lee. "What's cool about that is that if you know any of these characters they have pretty intricate past but if you read this book you're going to see those stories revealed in a whole new fashion."Team 7, which Jim Lee describes as the series that both of the co-publishers are looking forward to the most from the new wave of titles, is next.

DiDio said that the red room and black room in the Free Comic Book Day book is filled with artifacts that Team 7 collected, and you'll get to see some of those stories.

Lee said that The Phantom Stranger, which of course is written by DiDio himself, will be a title that helps to craft the elaborate backstory that explains the role that cosmic characters walking among us play at DC.

"We wrapped up some stories, especially Booster Gold's, where we see some strange things happen to Booster, Blue Beetle and the August General," said DiDio.

Bob Wayne reiterated something that DiDio said at an earlier panel, that Justice League #12 sets up Trinity War.

"The drums of Trinity War have started pounding," DiDio said.

"We wanted to make sure that after the first year it was a defining moment. There's an event that happens in this issue that has repercussions in the DC Universe for years to come," he said.

Next up is the Green Lantern: Rise of the Third Army story.

"What we're talking about his how awesome this cover is," Lee told the audience about the four-issue interconnected Green Lantern covers. "When people ask me what artists I'm following these days--Ivan Reis, I have no idea how he does it."

Next up is the Rotworld story. DiDio said that he truly enjoyed the characters of Swamp Thing and Animal Man even before the New 52. "We wanted to make sure that we had diversity in the New 52, and pushed these characters forward," he said.

"When I read [Batman: Earth One], I texted Geoff and just gushed," Lee said, telling the audience that Batman is "one of the hardest characters' mythologies to add something cool to" but that the creative team had done a great job of reinventing the wheel. He added that 40% of all Smallville readers actually started a ComiXology account to buy Smallville as their first digital comic.Next, they discussed digital-first books like Smallville Season 11 and Ame-Comi Wonder Woman. Jim Lee ran down the week's schedule, noting that most of the projects have a big presence outside of the comic book industry. "When we do press for them we know that somebody will be reading that article that's not really a comic book fan."

"There's nothing else you can say about Joe Kubert; he's a legend in the industry," said DiDio of the upcoming Joe Kubert Presents story.

"It's an election year, so there's going to be some great stuff" on the Mad Idiotical blog, said Jim Lee.

They also discussed Anthony Bourdain's Get Jiro. "It really surprised me," Lee said, "the art is beautiful." He went on to describe some scenes from the book, saying that all of the food stuff is based on reality.

"It's a great examination of food culture. Honestly there are people who take their food very, very seriously," Lee said, "and it's not too implausible that something like this could happen in the near future."

DiDio said that Bourdain is a huge comic book fan, and that he had intended to make a comic with Harvey Pekar before the American Splendor creator's death. It was implied that's the project that eventually became Get Jiro.

The Girl With the Dragon Tattoo came up next, with Lee uncertain of the release date until it was clarified as November. They also flashed back to yesterday's Before Watchmen panel, where Quentin Tarantino announced his Django Unchained comic book miniseries, which also hits in November.

Last up is Sandman by Neil Gaiman and J.H. Williams III.

"We've been trying for a while to get Neil back into the fold. He has many demands but one thing he's always wanted to do was one more story about Sandman," DiDio told the audience, saying that they wanted to make sure there was some new content for the twentieth anniversary. "He calls it 'During Sandman,' not to be confused with any other projects going on at DC right now," he added with a laugh.

Lee told the audience that the origins of the New 52 started at a creator's conference in late 2010. Ultimately the conversation turned to Superman and elements that they wanted to reintroduce into the character's mythology. "Out of that discussion, someone just said 'why don't we just reboot that book?' Then collectively a bunch of us looked at each other and said 'why don't we take that same sense of surprising the readers and do that across the entire line?'"

The pair declined to comment at all when asked about a Justice League movie, joking that they hadn't

Where did the decision to take Tim Drake as Robin out of continuity come from?, asked a fan.

"If we were another company, you would have been winning a No-Prize," DiDio joked. He clarified that once Jason Todd was presumed dead, Tim Drake never fully called himself Robin, taking on the Red Robin name instead.

Lee joked that he just assumed in the flashbacks, Tim was just at San Diego Comic-Con cosplaying as Robin.

A fan approached Lee to get his tattoo autographed.

When asked whether digital-first or digital-exclusive might be a road for cancelled titles, Lee said that the characters have been reincorporated into other titles. "They haven't gone away--you'll still see them within the New 52, but to answer your question directly, I don't think so." He pointed out that the digital-first material is mostly geared toward readers who aren't necessarily regular comic book readers.

The next question was also digital-oriented, with the fan asking whether more of the back catalog was coming to ComiXology.

"There really is an issue of bandwidth," said Lee, explaining that the books have to be coded for the GuidedView technology and that it isn't an instantaneous process. "There's a lot of work that goes into putting out all of these books," he explained, but "the short answer is yes."

Asked whether DC had considered adapting the Christopher Nolan Batman films, DiDio said "We chose not to do that. In the past we've always adapted movies when they came out but they never really got much traction." He said that instead they're pointing fans toward the books that are reminiscent of the films or that inspired the movie in question.

Asked whether there were any Earth One books in development besides Superman and Batman sequels, DiDio said that Wonder Woman and Green Lantern are being discussed.

As far as Grant Morrison's Multiversity, DiDio said that it's a "massive work" with a lot of moving parts, and that "once we know that it's all getting done in a way that is ready to go, we're going to put it out." He told the fan to look for it in the middle of next year.

"There was nothing personal on my end--I love Green Arrow," Lee said of his exclusion from the Justice League. He said that the company has other plans for the character, and that the story sets something big up for next year.

"We had two months where Aquaman beat the entire Marvel lineup," DiDio said when asked what New 52 books surprised him. "My biggest regret is that we didn't do Batman & O.M.A.C. as a series and that the 'O' in O.M.A.C. didn't stand for 'Owls'."

Lee said that the skepticism going into the New 52 was actually anticipated, and that "we're continuing to refine it" based on feedback from the fans.

"Dan has formed a secret Black Ops publishing company," joked Jim Lee when asked whether there was a conflict between their creative and editorial jobs. He said that when he was behind on Justice League, DiDio had hired another artist to draw his pages behind his back.

"Someday, maybe when there's an Absolute Justice League, I would love to publish those shadow pages after I track down the artist and kill him," Lee said, "because there can be only one."

"The hardest part [of working in comics] is separating the professional from the fan." He said that while every fan wants the happy ending, serialized storytelling mandates keeping the ball rolling, whereas when you're a fan of the character you want to give them a happy ending.

"I was going to say it was trying to find fast food at three in the morning when you're working on a deadline," Lee joked.

A fan asked the panel whether there would ever be a WildC.A.T.S. series, and what characters might be featured in it if there is.

"For me, WildC.A.T.S. was the first book I co-created at WildStorm so I want to make sure that we have the right creative team," said Lee, telling the fans that there are no plans in the short term but that when they do "we're going to do it right."

The final question was from a fan who asked whether Wally West would return. After a dozen or so fans applauded and whooped, DiDio said, "Well, with a response like that, I can only say probably not." More seriously, he said, "No plans at this time," explaining that characters not currently in use doesn't mean they won't show up eventually.

Check back in a while, because we'll have full audio from the panel, which is way funnier in person than in print.