This interview didn't go off exactly as planned. 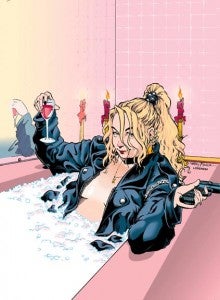 Every major convention that I have ever attended, has also been attended by Terry Moore, the creator not only of Rachel Rising and Echo, but of Strangers in Paradise—my personal pick for the English language's best graphic novel series. Every show, I've done an interview with Moore, talking about first Echo and then, later, Rachel Rising. With a major Strangers in Paradise announcement made at San Diego Comic-Con International this year, I wanted to make sure that ComicBook.com had a few words with the creator about his newly-announced prose novel featuring the characters. And we did—a very few. Enjoy our incredibly brief interview, presented with accompanying audio for those of you who would like to hear the sound of America's largest celebration of pop culture grinding to a halt. This story will be one of a number of videos from the floor of Comic-Con that we'll be posting throughout the week, so check back for that and much, much more as we wind down our Comic-Con coverage by ramping up what you see on your end! ComicBook.com: You announced at your panel that you're doing a prose novel for Strangers in Paradise. One of the things you said that struck me was that there were things you couldn't do in the comics that you wanted to be able to do. Can you elaborate on that a bit? Terry Moore: The most obvious thing is just longer sentences. It's pretty obvious that everything they say has to fit in a little speech balloon—and so I've been editing their speech as if it were a comic strip for years now, or song lyrics. It would be nice if I could just let them speak normally. Also, there's a big limit on what you can put into a comic book because it's going to go into a store that's selling to six-year-olds. I think that my readership has matured and I would like to write a more mature story. ComicBook.com: In Paradise Found, the documentary made about you and Strangers in Paradise, you talks about going to a store where they had your books behind the counter because they were "smut." I can't remember, though, that there was ever any nudity…and certainly no sex or violence that went on beyond a page or three. [At this point in the interview, the loudspeaker cut in to inform conventiongoers that San Diego Comic-Con International 2012 had concluded. People clapped and whooped, and the lights started going down.] TM: The party's over! We made it through another one. As we know, Strangers in Paradise is hardcore pornography and anyone who's ever even seen it should be arrested—so I want to do more of that in a novel.