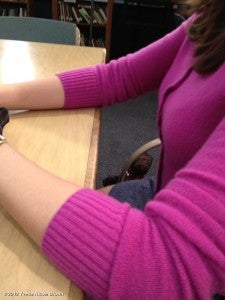 For fans wondering whether the change in showrunners may lead to a version of Community that's a bit less bizarre and risque than the one they enjoyed under Dan Harmon, here's a little food for thought.

Yvette Nicole Brown, who plays Shirley on the show, tweeted the following image, hosted on her WhoSay account, with the caption, "Look closely. #AnniesBoobs squared." The presence of the monkey, currently featured heavily in the ad campaign for NBC's Animal Practice and therefore part of an Olympic-sized dust-up earlier this month, suggests a certain willingness to embrace the zanier elements of Harmon's Community, and will likely be seen as a positive sign from many fans.The image, of course, is of actress Alison Brie's midsection, while she's seated in a chair in the show's study room, with a small monkey on the floor just behind her. Brie's character's name is Annie in the show, and the monkey? Well, her name is Annie's Boobs. She's named after Annie's boobs, and has been a frequent guest on Community since her introduction in the first season episode "Contemporary America Poultry."

The show's rabid fan base, who are particularly active online, has been torn between their loyalty to the show, which has been renewed for a fourth and likely final season, and its fired showrunner, who has been credited as giving the show its bizarre energy and anal-retentive commitment to detail.