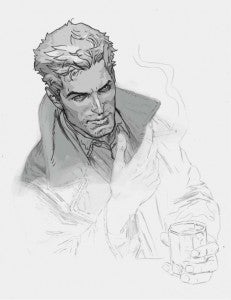 Back when the New 52 launched, we and many other comics pundits hoped that a fresh start would result in more genre diversity at DC Comics. And while we've seen a number of horror, espionage and war comics, as well as one Western, there's actually arguably been less genre diversity in the New 52 than there was in the old DC Universe. We lost Jonah Hex, for example, in favor of a book that still stars Jonah, but crowbars him into Gotham City. We gained war comics like Blackhawks, Men of War and G.I. Combat, plus espionage-themed books like Team 7, but they were all in service of, and starring, superheroes and supervillains. And now, having lost WildStorm a while ago and had a number of Vertigo titles folded into the DC Universe by Flashpoint, the most important of DC's company-owned characters to have a Vertigo ongoing is headed over to the New 52, losing his #300 and gaining a #1. John Constantine has been in the New 52 for a while, appearing in Justice League Dark and Sword of Sorcery, but all along, the character has retained his title, his history and his bad-ass persona over in Vertigo. Now he's headed to the DC Universe full-time, where he'll likely stop doing things like chain smoking and cursing. Apparently, DC didn't learn from the movie version of Constantine that a PG-13 version of the character isn't particularly appealing to most fans. Hellblazer is a title with a lot of history; it's one of the most consistently excellent books DC has published (under the Vertigo banner or not) for the past 20 years. And while it's not likely the character will be toned down much for the New 52 (after all, look at some of the mature readers titles they're already publishing in the DCU these days), it feels inevitable that they'll have to "Nerf" Constantine somewhat to make him fit in with the tone of the books. Heck, they already have, in his Justice League Dark appearances. Even if that weren't the case, bringing the character to the New 52 sends a clear message: All of DC's most important intellectual properties are to be contained under a single umbrella. They'll all be interacting and playing nicely in the same sandbox. At the end of the day, removing Swamp Thing and Constantine from Vertigo offers a lot of storytelling possibilities only in that it adds them to the DCU. If they're already there, and were additionally being represented by non-DC-canon, mature readers stories, that allows for a wider variety of different work and so the decision to close them off from Vertigo actually stifles storytelling possibilities. The choice to remove Hellblazer from Vertigo, bring him to the DC Universe and give him a more "friendly" title for his book suggests that DC is homogenizing their line. They're likely creating what they assume will be a guaranteed hit as a supernatural/horror comic they can hang their hat on in the New 52, since none of those types of books have done the kind of numbers DC had probably hoped. The Dark and The Edge families of DC's New 52 have been the hardest areas to find a bona fide hit, and often the "big hits" in those families don't represent the concept of the line all that well. The more magical elements of The Dark have had a harder time finding purchase with the readership, while Swamp Thing and Animal Man have been the big hits. DC may hope that Constantine can be the title to really set The Dark apart from the rest of the line. That won't work if they continue doing what they've been doing, taking every great, out-there idea like I, Vampire and Amethyst of Gemworld that DC ever had and forcing them to play nice with the Green Lantern titles. As DC increases their digital presence in the hopes of connecting to new audiences, it seems counter-intuitive that they would discontinue a long-running title with appeal outside of the Wednesday faithful and incorporate that character back into the mess of complicated, interwoven superhero continuity. Retitling and renumbering the book arguably makes sense, given the fact that there was a movie called Constantine and that a #1 looks more welcoming than a #301 to the uninitiated--but the intended effect of such a relaunch would seem to be undermined by bringing Constantine into the DC Universe proper, where he's got to share real estate and a timeline with heroes and villains whose complex histories haven't been all that greatly simplified by the New 52.