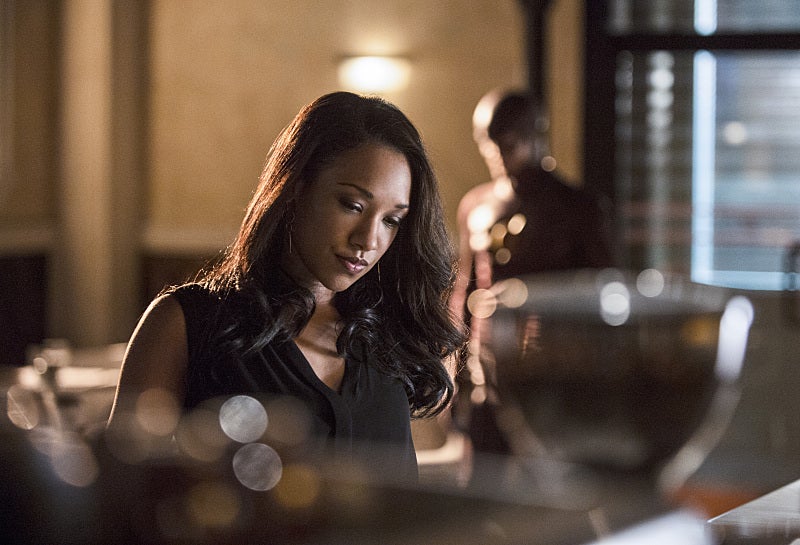 With only one half of the season completed, The Flash has delivered so many thrills and twists, it's hard to imagine what the showrunners have in store for the season finale. With so many surprises that's been delivered, it's understandable that even the most astute viewer may have missed the hints of another superhero on the rise; a super heroine rather.

Barry and Joe aren't the only crime-fighters in the West household.

To date Iris West has either played a key role in the capture or even single-handedly taking down Girder and the Clock King.  Two men who are not only criminals but prominent super villains in the DC Universe.

This definitely warrants noting and examining. The characterization of female best friends/love interests can be hit or miss to put it diplomatically, especially when it's men at the writing pen.

As a character, Iris has been a most welcomed change of pace from the usual  drama queens, distressing damsels and other walking tropes that the female best friend/ love interest would be reduced to being.

You're not just rooting for Barry to one day win the girl of his dreams, you find yourself rooting just as hard for said girl of dreams as well because she is one of a kind.

Iris is intelligent, loyal,  ambitious, and fearless. Breathtakingly beautiful, she also has a warmth and light about her which rivals Barry's, and that's saying a lot. Kudos to Candice Patton and her portrayal of the DC heroine. It's little wonder that Barry and Iris have such a special bond. Iris has also proven to be something else in recent weeks, a formidable crime fighter.

Despite being outmatched in nearly every way possible when she was taken hostage by Flash's old rival, Girder, Iris kept a cool head and her wits about her and aided Flash in defeating the Scarlet Speedster's former childhood bully. The vicious right cross she delivered to the thug definitely illustrated a major point.  Iris is neither helpless nor a victim.

Unfortunately for the Clock King, no one bothered to send him the memo about Ms. West when he took the Central City Police Station hostage. A genius like him probably saw all the angles and probably would've had a contingency for the Flash had he not been indisposed. The Clock King no doubt calculated that Iris would be a safer hostage than her father, Det. Joe West. As the gunshot wound the Clock King suffered, proved that when it comes to being tough, Iris is her father's daughter.

Just the same, she's proven to be far more than she probably realizes. She managed to hold her own against a very deadly meta-human in Girder. Regarding the Clock King, she single-handedly did what it took Arrow, Black Canary, Red Arrow and Diggle to accomplish. She single-handedly did what a station full of seasoned police officers couldn't achieve. No powers, no training, just  innate courage, cunning and heart. Some champions are chosen by a lightning bolt. Others are born for the role.

These two cases of heroics is very consistent with Iris's history. More than the fact that her father is a cop, her boyfriend is a cop, and the subject of her obsession (and potential suitor) is a crimson superhero who unbeknownst to her is also her best friend,  Iris herself has always had a calling to protect and serve.  After all, she would've entered the police academy if her father, the detective, hadn't stopped her. The desire to protect and serve is the reason why she launched the blog dedicated to the Flash. She's sharing his story to give the people of Central City hope that there is a champion in the world fighting for them.

The pacing and clues within Iris's characterization is very reminiscent of the hints about Laurel that were dropped during season one of Arrow. Just in case her name wasn't enough of a reveal that she would become Black Canary in roughly two seasons, the writers add a classic scene where she shows up and saves the day by single-handedly making a light workout out of a pair of bouncers and a dirty club owner who was pummeling Tommy and Oliver. The same Oliver who is supposed to be a trained  vigilante.

Given the similar personalities and backgrounds of both these exceptional heroines, that's almost irrefutable evidence in itself. A crossover/team-up should definitely happen for Laurel and Iris in the very near future.

Whether it's Iris West, the Lance sisters, or Barbara Gordon, the daughters of police officers have a tendency to tend to become major players and achieve greatness. Not only do they often become crime-fighters, but they easily capture the hearts of extraordinary men and women as lovers.

Given all of this, it's little wonder that Barry Allen has been head over heels with his best friend. A lot of us are kind of in love with Iris West now.

Could A Cape Be In Iris West's Future