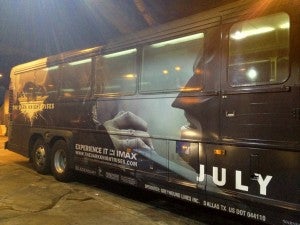 Greyhound buses featuring promotional decals for The Dark Knight Rises have begun to hit the roads in promotion of the contest they're running to send the winner and a friend to New York City.

Check out the image at left, taken this morning at the New York Port Authority Bus Terminal while en route to the San Diego Comic-Con International.