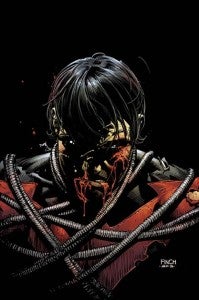 The solicitations for DC Comics's February 2014 product have hit the Web, and among them, the sixth issue of Forever Evil, teasing the "final fate of Nightwing."

It wasn't that long ago that Forever Evil writer Geoff Johns did Infinite Crisis--another seven-issue event miniseries in which Nightwing was planned to die in #6 before word got out and fan outrage changed the plans.

But with rumors that the character will appear in Batman vs. Superman, it seems likely that any potential death for Nightwing will be short-lived. And of course the Big Two rarely tease "final fates" for people who are actually going to die, since it's a bit of a giveaway.

Nightwing's own series isn't solicited as "final issue" just yet, so it seems unlikely he's going anywhere until March. Of course, recent months have seen both DC and Marvel forego the "final issue" solicitation in favor of just not having an issue solicited the following month.

You can see the cover at right and read the solicitation text below.

The final fate of Nightwing! The most unlikely of allies have set the Crime Syndicate in their sights — and they’re playing for keeps while the life of a hero hangs in the balance! Plus, the identity of the mysterious man in the hood is finally revealed!