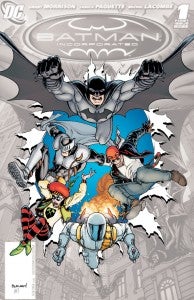 DC Comics confirmed with The Associated Press today that they would launch a series of "zero issues" in September, celebrating the first anniversary of the company's New 52 initative by going back to the beginning and providing some insight into what was going on in the DC Universe prior to the wave of #1 issues that hit last September. For one month, the publisher will number all of its books at #0 and explore elements of the characters' backstory that weren't previously revealed in the relaunched continuity.

“Some issues will tell the origins of a character or a team, or in some case where an origin has already been told, they will fill in the blanks in terms of questions readers may have about the New 52 DC Universe,” said Bob Harras, DC Entertainment Editor-in-Chief, in a blog post. “Each of these issues promises to reveal something surprising.”

“We underestimated the hunger and appetite that readers would have for this backstory when we launched,” said DC Co-Publisher Dan DiDio during an interview with the AP. “The readership has been very intrigued in finding out the backstory in the five years since the emergence of the Justice League.”

That might be the worst-kept secret since the announcement that it was Northstar getting married in Astonishing X-Men #51, except that DC followed up the (already widely reported) news with the announcement that four new titles would spin out of zero month, including some characters who haven't been seen regularly in years.

The four titles--Talon, Sword of Sorcery, Team Seven and The Phantom Stranger--take on a wide variety of different tones, from the fantasy-tinged story of Amethyst, princess of Gemworld in Sword of Sorcery to the super-soldier antics of Team Seven picking up where a book like the recently-cancelled Blackhawks left off. Talon, of course, will pick up threads from the Court of Owls crossover in Scott Snyder and Greg Capullo's fan-favorite Batman series and  The Phantom Stranger seems designed to tie into Trinity War, since it features one of the Trinity of Sin in the title role, and a character we've already seen squaring off with Pandora in the page of Justice League. The following month, the four new series will get #1 issues while the rest of DC's line will resume its regular numbering.

Sword of Sorcery will be written by Christy Marx, with art by Justice League International castoff Aaron Lopresti and feature a back-up story by Tony Bedard and Jesus Saiz that "brings Beowulf versus Grendel to a post-apocalyptic wasteland," according to the AP.

Talon will be plotted by Batman writer Scott Snyder but written by James Tynion IV, with art by Catwoman's Guillem March. It apparently will revolve around one of the Talons who "escaped" the Court of Owls and wants to live a normal life, but is being hunted by the order. That, frankly, sounds remarkably similar to the backstory of the pre-relaunch Batman character Azrael and one has to wonder whether The Order of St. Dumas will eventually come into play in the history of the Court of Owls

The Phantom Stranger is the only really unsurprising one of the bunch, given that it's been guessed at online for a week or so now. Written by Dan DiDio, whose writing plate had been empty since the cancellation of O.M.A.C., the series will feature art by Astro City's Brent Anderson, who most recently drew some fill-ins on Action Comics for DC.

Given that DC has not been shy about their desire to keep the "New 52" at 52 titles, it's hard to guess what DC books might be on the chopping block as a result of the addition of four new titles to the slate. Some answers may be found by looking closely at where the creators on these new series come from, but as always that would be a gamble because there's nothing to say that the zero issues wouldn't be a perfect time to do some creative team shuffling. Indeed, that's been a rumored part of the plan since Zero Month was first rumored.

These announcements also don't answer questions raised by the cancellation of Justice League International, which left readers wondering what would happen not only to the characters in the book but to writer Dan Jurgens, who doesn't yet have a new project announced but told us recently that he would. It also doesn't address rumors that recently arose about the potential for a Katana series, which came up around the same time as The Phantom Stranger made its way into the conversation.