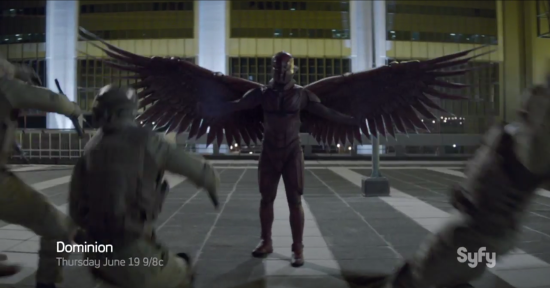 SyFy has announced a new transmedia initiative that will add interactive elements to several of their shows. Defiance's second season, premiering June 19, will feature a new character based on an actual player's in-game avatar. The winner of the "Play the Game, Join the Show Contest" was revealed on Facebook in a video by the show's executive producer, Kevin Murphy, in September. The live-action character based on the winner's avatar will be joining the show's cast this summer. Also launching with season two is "The Defiant Few," a parallel storyline that viewers can participate in where they'll be encouraged to take on "missions" consisting of web-based casual games and challenges that will propel this storyline and give viewers a chance to win substantial real-world prizes. The writers of the new series Domnion have also created "Citizen's Handbook – A Guide to Vega," which will provide an immersive, interactive guide/handbook to the fictional city of Vega, featuring exclusive video and multimedia content created specifically for this experience. It will allow viewers to delve into the rich mythology of Dominion weeks before the series premiere air on June 19. For Season 7 of Face Off, SyFy will be employing the Twitter Popularity Index technology used previously with Opposite Worlds to measure the popularity of contestants on social media. A new 10-episode live action original digital series, called Underlings, is a workplace comedy that takes viewers inside the criminal organization, G.O.R.I.L.LA. (Global Oppression, Rebellion, Intelligence, Larceny, and LAsers), and introduces them to the three guys who make sure the printer is stocked with toner, organize the office karaoke night and keep the death rays deadly. Syfy's first original digital comedy stars Jonathan Howard, Chris Mena and Tony Vitale with Jessica Chobot (Nerdist News), Michael Naughton (Kirby Buckets, It's Always Sunny in Philadelphia), James Adomian (Comedy Bang Bang, @midnight) and Joseph Gatt (Game of Thrones, Banshee).

Defiance, Dominion, and Face Off To Be Part Of SyFy's Transmedia Initiative