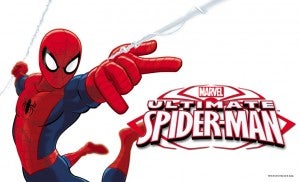 Cartoon Network has DC Nation, and now Disney XD has a Marvel Universe programming block beginning on April 1st, with Ultimate Spider-Man as its centerpiece, according to a press release from Marvel Entertainment. Today at the Television Critics Association Press Tour in Pasadena, California, Gary Marsh, President and Chief Creative Officer of Disney Channels Worldwide told the media that the channel will feature "new animated short-form series, live-action interstitials and the series return of The Avengers: Earth's Mightiest Heroes." The latter is was a short-lived but fan-favorite animated adaptation of Marvel's The Avengers which recently became available for live streaming on Netflix and Amazon Instant Video. "Marvel Universe block is an incredible animated ride filled with fantastic action and adventure," said Jeph Loeb, former comic book writer and current Head of Marvel Television. "The spectacular team of writers and animators capture stories with all the dynamic fun you can imagine. Disney XD is the perfect place for families and Marvel fans of all ages to come together every Sunday." In spite of recent developments in the comic books that saw the Peter Parker of Ultimate Comics Spider-Man killed and replaced by Miles Morales, a half-black, half-Hispanic teenager who allowed the creative team to reset the series after more than 100 issues, the Ultimate Spider-Man TV show will feature early stories of Peter Parker, shortly after being In today's press release, Marvel explains the series as follows:

It sounds as though the show is being designed with the Marvel movie universe in mind, tying in unofficially where rights issues have prevented the live-action feature films from actually doing so. Whether this block was created in direct reaction to the DC Nation programming at Cartoon Network is an interesting question; certainly it seems as though this would be a better home for the Iron Man and Wolverine animated series currently housed by G4 if there was any inkling back when those shows were being produced and marketed that such a thing would exist. Still, with those shows on G4, this block on Disney XD and the in-development Incredible Hulk and AKA Jessica Jones TV series in production for the Disney-run ABC, Marvel has poised themselves as the dominant force for superhero content on TV in much the same way they did with feature films during the last decade.