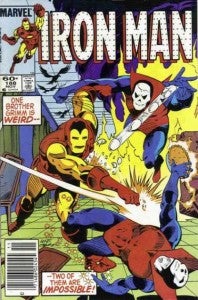 It's back, and we couldn't be happier! Several months ago I started Dollar Bin Discoveries, a (hopefully) recurring feature that would highlight those issues of comics we find in the "dollar bins" of comic book stores. Sometimes those issues are diamonds in the rough, other times, they're cubic zirconium, not worth much in content or the dollar you spent on it! We dropped the feature for awhile, but I'm pleased to bring back its resurrection with this return edition! For those who are reading this feature for the first time, I give you a general rundown of an issue that was legitimately found in a dollar bin of a comic book store, hit the highs and lows of the issue, and determine if the issue was worth the full dollar spent on it, or if it might be worth the change in the jar by the washing machine. Let's get things rolling with this newest review!! Issue: Iron Man #188 Date: November, 1984 The Rundown: This issue of Iron Man finds several new beginnings and costume confusion for several characters! Noted writer Denny O'Neil handles the scripting for this issue which sees Jim Rhodes taking over for Tony Stark as Iron Man, and the adjustment has apparently been a tough one for both men. Stark, now working for the awfully named Circuits Maximus developing computer programs, finds himself still tied to the bonds of being Iron Man, and Rhodes struggles with the circuitry of his costume and its headaches, literally, and the frustration he feels at trying to do as good a job as Tony in the role as Iron Man. That last bit of mental business gets a bit complicated by the appearance of two of Marvel's strangest villains, both in look and powers, The Brothers Grimm. After wreaking havoc in Spider-Woman, the characters find new life in the brothers Percy and Barton Grimes, who find the costumes in the back of a theater they have purchased. Their powers are odd, to make an understatement, and the origin of the characters is strange as well, involving a supernatural pair of dolls. In this issue, the Grimes brothers have decided to use the costumes and their powers to get revenge on a rival real estate mogul. It's a typical 80's plot, with a minor villain settling a petty score through the use of their costume or powers. The destination of their revenge is a new restaurant, which just happens to be the site of a celebration Tony Stark and friends Jim Rhodes, Clytemnestra Erwin and Morley Erwin, partners in the new company mentioned earlier, Circuits Maximus. Stark hopes this will be a new direction for himself and his career, as he can focus more on the personal side of his work, odd co-workers notwithstanding! When the small firm lands their first gig, they head to The Pines for dinner, the location, of course, of The Brothers Grimms' vengeance, and on the same night, no less! As the brothers begin their assault, panic ensues, and Rhodes slips into the broom closet to emerge as Iron Man, in the hopes of bringing down this odd reign of terror. With trick pies that turn into birds, a flying star and decoys, Brothers Grimm succeed at making Iron man look foolish, further frustrating Rhodes in his new role. Rhodes takes an unusual position by staying put at the scene of the crime, hoping that the Grimms will return, and they oblige. This time a beanstalk plays a key role in the Grimms' escape, and Iron Man is again made to look foolish. In a bit of a humiliating move, Tony Stark ends up saving the day and REALLY making Rhodes feel bad about himself, all thanks to a slip of the tongue uttered at the restaurant by one of the Grimes brothers, which leads to their arrest at their real estate firm. The issue ends with Rhodes having a massive chip on his shoulder for Tony Stark. Final Thoughts: The issue as a whole is a bit strange, as we didn't typically see villains with powers such as these fighting Iron Man. The Erwins make annoying counterparts, their names not the least of the distractions, and the story reads a bit like a one-off episode of the 1960's Batman TV series. Overall the story of Jim Rhodes and his developing struggle to become the new Iron Man and to step out of Stark's shadow almost takes a back seat here to the Grimes and their fun with their new costumes. Parts of the story are fun, and as a one and done in regards to the Brothers Grimm it's not bad. They were an interesting pair of villains who have continued to pop up over the years, but their gimmicks overshadow any true evil they could have caused. Overall Value: .50 out of $1.00