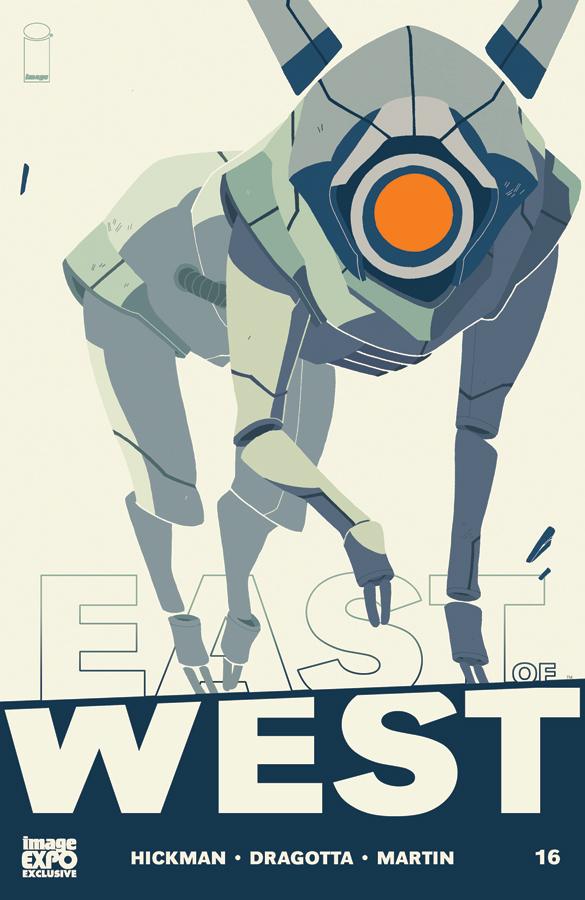 After an almost four month hiatus, East of West has returned to comic shelves to begin the second year of Jonathan Hickman and Nick Dragotta's apocalyptic alternative history of the United States. East of West #16 strikes a dramatically different tone from the first fifteen issues of the series. "Year One" was composed primarily of politicking and place setting. It had to establish a broad new mythos and history, introduce dozens of characters, and create multiple layers of intrigue between seven nations and the various players within each nation. There were certainly moments of explosive action, but nothing on the scale of what appears in this issue. East of West #16 is a bold and bloody thesis statement for what comes next in this epic series.

Dragotta composes a clear picture of the future in the opening pages. A landscape is covered in literal fields of bones and a river of blood. The cause and effects of this devastation will be explored later in the issue. What is important at the beginning is the look and feel of obliteration. Nothing connects the horror found beneath the feet of War, Famine, and Conquest to the lush gardens and vibrant cities that populate the seven nations. This is a world defined by a single concept: war.

The depiction of the three horsemen striding across this landscape provides them with a truly apocalyptic aesthetic for the first time in a series. Before they were children wandering the world seeking a destination, but now they have arrived. When first seen in East of West #1, they were being born from the Earth as small, huddled wet messes. Dragotta creates a link to that first appearance here. In a pair of splash pages all three can be seen striding across the world with seemingly nothing to oppose them. Frank Martin colors the entire sequence in a palette dominated by a deep burgundy hue. Through his coloring we are shown a world that has been literally and figuratively set ablaze.

If the opening sequence of East of West #16 sets the tone for where the story will go next, then what comes next after the title spread reveals the scope being sought by Hickman and Dragotta. Two sequences set in Texas tell the same story, but in drastically different styles. The war between Texas and the Great Nation is explored in a grand hyper-compressed retelling of history accompanied by a detailed action-packed moment in time.

Dragotta plots the course of a single war in three pages with only three panels each. His compositions provide a wide screen effect to the entire sequence with each long panel stuffed with detail (set pieces, soldiers, and explosions). There is no repetition between panels, each follows as a natural reaction to what came before, covering the course of an entire war. Hickman scripts narration over these panels summarizing the cause and effect sequence of enormous events in short order. It is a compressed style of writing that he has perfected in the pages of Avengers and it is applied to great effect here. Although the war begins and ends in a span of only nine panels, Hickman and Dragotta instill it with significance.

This hyper-compression of time and events is followed by an action sequence that uses twice the number of pages and four times as many panels. The deaths of thousands and movements of massive warships are replaced by the actions of only a few individuals. It is the war between Texas and the Great Nation compressed into a microcosm. Dragotta continues to create some of the most propulsive action sequences at Image Comics. When bullets begin to fly and explosives rip into the air, the setting and characters blur to reflect the velocity of the action. Every panel is carefully selected to move the story forward, building and releasing tension so quickly it almost causes whiplash.

There is an eight panel sequence depicting an attempted execution thwarted in an homage to the classic Western The Good, The Bad, and The Ugly. Dragotta tracks the three characters involved creating tension as an unseen sniper views the interaction between executioner and prisoner. The slowly tightening rope, the shouts to the crowd, and constant gaze of the rifle's scope build perfectly to the sequence's climax. This small section of the entire sequence displays why Dragotta is a master of orchestrating action.

Given the rollicking, fast-paced action of these sequences, it would be easy to lose track of the smarts and black comedy embedded into Hickman's script. The Nation speaks to conquered Texans of manifest destiny. They not only mention the same concept used to justify the genocide of Native Americans, but claim it as a proud moral code in the same manner as expansionists throughout the 1800s. It will tear history buffs between tears and laughter.

Not all of East of West #16 is as riveting as its first half. There is still a massive cast of characters composing an even larger net of schemes to be addressed. Conversations and politicking fill the back half of the issue and slows the pace considerably. Underneath all of these conversations is a reinvigorated fire though, the same one felt in the opening pages of the issue. The bloody toll of war has added meaning to every word spoken and alliance proposed. Characters are no longer plotting for what may happen, but acting to survive or conquer.

The groundwork laid throughout the first year of the series allows these sorts of backroom discussions to carry even more weight. Hickman's detailed character and power dynamics require space to construct, but here they are finally able to play naturally. Readers are able to play along with the characters now, potentially viewing each alliance and rivalry and where they may lead. It is a complex drama on par with Game of Thrones where attention to detail is rewarded even in seemingly calm discourse.

Even in those quiet moments at the end of East of West #16, it is clear the story has changed. Year One was an introduction to a wide, new world. It carefully constructed history, politics, and religion into a cathedral-like structure. Year Two has set that structure on fire. War has arrived. The action, the impact, and the drama of East of West have all been elevated as the world approaches its end. Hickman and Dragotta have revitalized the series in this introduction to Year Two. They are starting to blow this world up and it appears that as things get worse, East of West will only get better.

East of West #16 is an Exhilarating Return for the Series