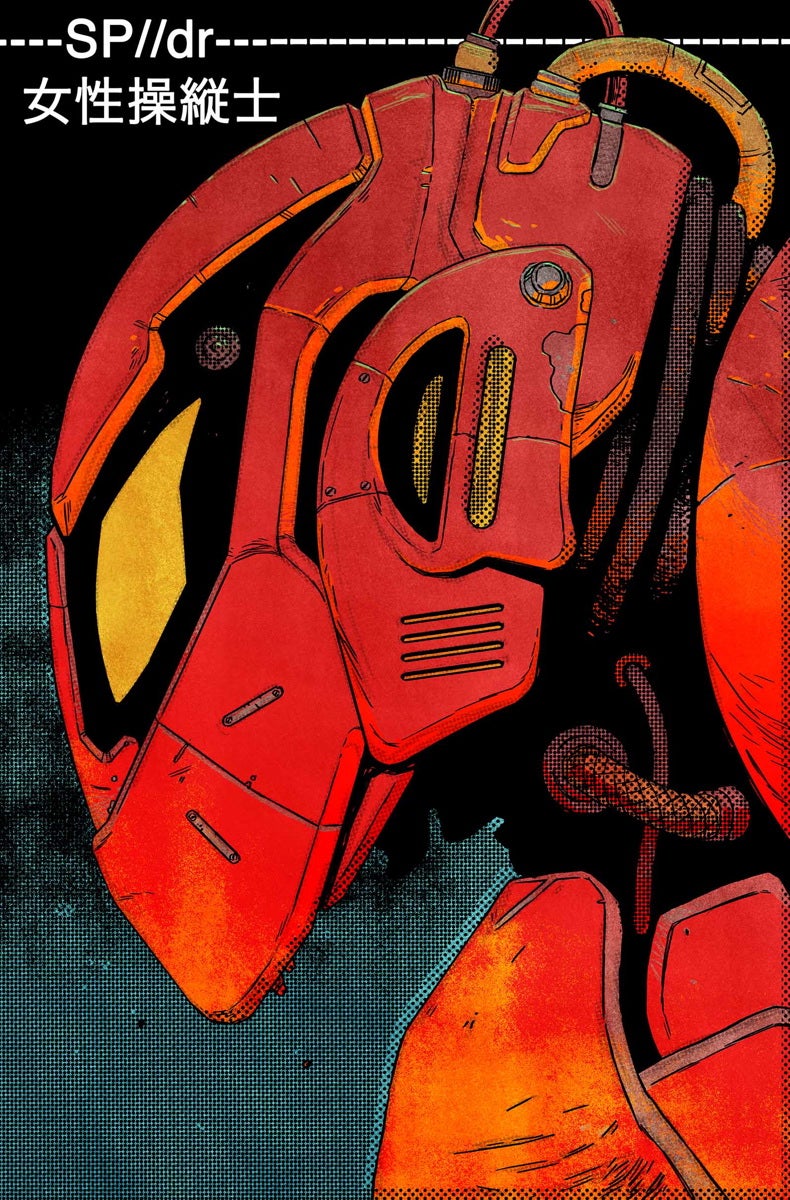 Gerard Way has created some of the most engaging and interesting twists to the superhero genre in recent memory in the creator owned series Umbrella Academy and The True Lives of the Fabulous Killjoys. Way has shown a knack for intriguing concepts, visual design, and establishing excellent collaborations with some of the best artists in comics. His debut at Marvel, given almost carte blanche to reinvent Spider-Man in an alternate universe, is a reason for excitement.

In Edge of Spider-Verse #5 Way and artist Jake Wyatt create some of the most intriguing visual and thematic concepts of the mini-series. This team does not take any half measures when reconstructing the Spider-Man mythos. Instead, they opt for a complete overhaul. The result is a comic that feels almost entirely new with only some slight connections to its origin material.

The being called SP//dr that serves as the issue's protagonist is a three-part combination composed of a large mechanical suit, a tiny spider, and a young girl named Peni. These three act as individual characters and contrast one another in a variety of ways. They are separated by massive differences in size. Peni dwarfs the spider that often rests on her wrist and is, in turn, dwarfed by the massive mechanical suit. When together, the three parts create a dynamic hero filled with both power and grace. They all contribute a distinctive element to the hero's effectiveness. The suit provides the powers, but is lifeless. Peni adds a human element and moral compass. The spider is the animalistic instinct that makes the other two effective.

That combination speaks to the various ways in which technology and biology combine to create new potential. It's a concept that Way and Wyatt explore in the comic's villain as well. Engineering, both genetic and mechanical, also warps this version of Mysterio. He is re-envisioned with a spherical motif and the personality of a celebrity obsessed Redditor. These versions of both Spider-Man and Mysterio explore themes far different from the original Stan Lee and Steve Ditko creation. There is an emphasis on progress and the multi-faceted advancement of technology that is nowhere to be found in Amazing Fantasy #15.

There is also an interesting commentary on the concept of destiny. The most recent incarnations of Spider-Man on the big screen have become obsessed with the idea. Way and Wyatt tap into that theme, but bring out the horrific nature of pre-destination, rather than making it seem heroic. Peni is the only person capable of becoming SP//dr and has very little choice in the matter. The spider chooses her after it is released in a room without her knowledge. Ben and May are transformed into captors locking Peni into a role. The sequence in which she is "chosen" carries some frightening overtones of parental subjugation and the loss of control.

None of these ideas ever cohere into a story. The issue is offered as a series of vignettes instead. There is an origin, a super villain battle, a superhero team up, and a big crossover. Way and Wyatt hit all the staples of superhero comics, placing their ideas into a variety of settings and tones. It lacks a through line, but instead gives a feeling of what SP\\dr could be about.

Despite its lack of a traditional plot, Edge of Spider-Verse #5 succeeds. It leans on its ideas and their visual presentation, giving readers images that they can chew on. For readers and critics preoccupied with story, this may be disconcerting, but I found it to be an appealing stretch of a mainstream superhero comic. There are a lot of appealing factors within a comic besides plot.

Edge of Spider-Verse #5 is Filled with Fresh Concepts (REVIEW)