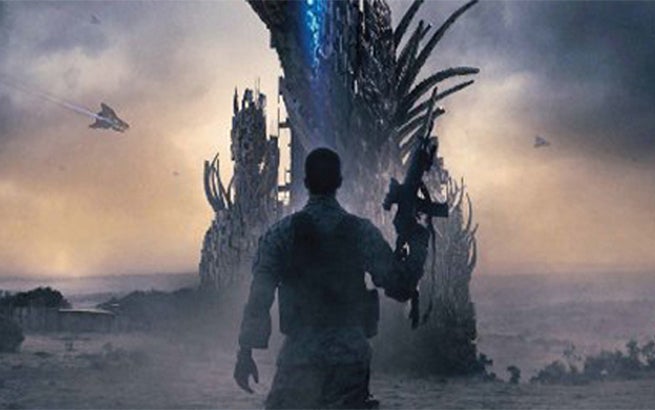 On Friday, Jabbar Raisani's Alien Outpost film was released in select theaters and through VOD services.

Alien Outpost is a fictional documentary set in the near-future that follows a group of soldiers on their quest to eliminate the last of an alien threat on threat.

Jabbar has specialized in working on visual effects for Game of Thrones, The Flash, Man of Steel, Iron Man, and more. Yesterday, ComicBook.com got a chance to sit down and talk with Jabbar about his new film.

I just watched Alien Outpost last night. For an indie film, I'm impressed. That couldn't have been easy to envision on a low budget.

No, it's not. It's not easy to envision it, nor execute it on that budget we had, but I'm happy with it.

I talked to Joe Reegan last week. He gave me a synopsis of the movie because I don't want to give my own, I wanted hear you guys explain your takes on the film. So, you're the brains behind it, you and Blake Clifton, can you give me your description of the movie?

Yeah, absolutely. The sort of 30,000 feet view is a group of soldiers in the near-future. We are 10 years post an alien invasion, in which Earth's forces were able to defeat the aliens, but pockets of the resistance are left on Earth. We are embedded with a group of soldiers at Outpost 37 as they defend their area from a pocket of resistance and the resistance is stronger than they realize. That's the overall plot, but really it's a brothers in arms story. It's about guys trying to do the best with the mission they've been assigned with the resources they have. Unfortunately, it's been a decade since the aliens were a real threat, so they find themselves out there without the kind of support they had a decade earlier. They're still trying to fight the fight and the mission that they had.

It's about a group of soldiers on their own trying to succeed in the mission. It sort of harkens back to a traditional war story, or brothers in arms, even though it's futuristic sci-fi.

Yeah, you can definitely feel the mix of the traditional war story and the futuristic sic-fi. You guys did a great job on that. I watched the making of the special effects video which you play a part in. When I spoke to Joe, he told me that a lot of the explosions were real in Alien Outpost. How true is that?

Yeah, there's two explosions that are composited in. They're at the end of the film, I won't get specific into what is exploding because it will give away the story, but there's two in the final fight scene that are composited but every other explosion are there on set. All the guys are firing real weapons with blanks. There are things from the early outset where me and Blake sat down and said, "Well, what are we wanting to achieve here and how do we want to go about achieving it?" I have a lot of background in post-visual effects and tactical effects, and said, "the more we can put in front of the camera, the better this is going to be and the less we will have to spend in post."

Post is absolutely the right choice for certain things, but if you can do it on set it's much more cost effective. It takes more planning, but if you can plan it and commit to it, then on set is the way to do it. Each week, we had massive action sequences we had to film and we only had 24 days to shoot this. For each of those weeks we had an action sequence and with every action sequence we would have a major explosion or event. There's this one explosion at the outpost that it took literally two days to prep the explosion. It is a massive, massive explosion. That's one take. Most of the big effects stuff is one take. You only have one shot. It's just a commitment I made upfront, Blake and I shot it. Between ourselves and the producers, and we said, "let's do it." Everyone will be on their A-game because everybody knows it's in one shot.

The shot in the trailer where we're in the back of the vehicle driving away from this dark background and you just see this massive explosion, that's on camera. It was one of the most tense moments of the entire shoot because we only had one shot to do and it was an insane amount of munitions, as well as a big part of our special effects budget. There is a three button click, that the characters Andros does, that has to be perfectly timed with the explosion. So, I'm in the vehicle, Blake is on top of the vehicle filming backwards, Riley's in the backseat, our first AD is next to me, relaying to our effects guy who is outside of the vehicle when Riley clicks the button for the third time. So, it was just a lot of rehearsal, a lot knowing exactly what we're going to do and when we're going to do it. It works, it all looks great, but they're intense moments like that when you're shooting them.

Yeah, when I was watching that I was wondering if that was a green screen outside of the truck or if that was a real explosion because it looked so real and good, but it would be hard to capture. Now, that you tell me it was real that's so impressive.

Yeah, it's all real. It was one of those things where the cost of doing as visual effects is probably somewhat the same as doing it for real but for me it's better if it's real, and all the tension and intensity that you're feeling in that scene, that's real.

What about the Reds? What are those and how did you make those happen?

The Reds on impact have that red explosion. While there was real muzzle flash there, we enhance those and turned them red.

Okay, so without giving anything away, the ending sort of left me thinking there has to be a sequel. Can we expect a sequel to Alien Outpost?

Yes. Absolutely. As conceived, there are 2. Two which takes us into where film one leaves off and the film three, which is the conclusion of the story of Outpost 37. Then there's also a prequel that would go back and fill in all the gaps between the invasion and the formation of Outpost 37. Throughout the film, it's one of those things that we tried to leave a lot of clues and details and Easter Eggs about the things that happened without getting too involved. The approach we went with is these documentarians and the rest of the world are aware of what happened so they don't need to be hammered over the head with details, but for all of us in our world here, it's just enough to give you what happened without filling in all the gaps. Just enough information to get the story and get attached to these characters.

Bottom line, what can people expect from Alien Outpost?

Alien Outpost is in select theaters now and available on demand through XBox Video, iTunes, and Amazon Instant Video.