ComicBook.com can exclusively reveal that Mark Millar is returning once again to Hit-Girl with a new ongoing series, and we got the man himself to answer a couple burning questions about it.

Here's how the new ongoing, which is scheduled to premiere on February 21, 2018, is described in solicits:

"HIT-GIRL IS BACK! The pint-sized Punisher-meets-Polly-Pocket has left America behind and set off to serve justice around the world. First stop: Colombia. A mother seeking vengeance for the murder of her child enlists Hit-Girl to destroy his killer, but Mindy has bigger plans for Colombia's most-feared hitman."

The first arc is written by Millar himself, with art by Ricardo Lopez Ortiz. You can check out our gallery for covers by Amy Reeder, Kim Jung Gi, and Rafael Albuquerque. You can also follow along on the official Facebook and Instagram for further updates. 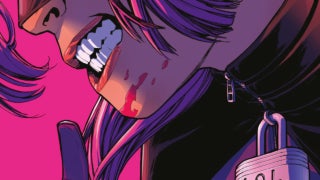 But what exactly did Millar have to say about all this? Read on below for details on where the new ongoing picks up, what we can expect going forward, and how it relates to other Millarworld properties.

ComicBook.com: Hit-Girl is back! What makes now the right time to bring her back?

On the one hand, the tenth anniversary and the relaunch of the series with Johnny Romita. But on the other I never wanted them to go away. We sold over a million copies of these trades around the world, and we've had two big movies and Halloween costumes and toys. [Hit-Girl] just hit big, but I was too busy with the other series and the company sale prep, but in this past year I could redress that.

Is Hit-Girl going to be all Mark, or are you letting the reins go a bit like you've done in the past from a writing standpoint?

I've written the first big storyline, and this of course will also be the first graphic novel. But just like [Kick-Ass] this is an ongoing monthly we're launching, and every big arc has a superstar creative team. I'm being followed by someone better by the name of Kevin Smith, and his idea is just so unique. Mine takes place in Colombia, his in LA, and every arc will be in a different country. Other creators lined up are Frank Quitely, Rafael Albuquerque, Pete Milligan, Eduardo Risso, Daniel Way. There's an Asian artist I'm in love with call Kim Jung Gi, and he's doing a big arc. It's very high end. We're spending a lot of money and just hiring people [I'm] obsessed with.

Will we see any crossover with the new Kick-Ass Series?

No, not the new one. That's entirely self contained. But we pick up exactly from the last page of [Kick-Ass] 3 and the wee guy Mindy's taking on and training to be her new [Kick-Ass]. It's very fun. I've actually enjoyed having [Kick-Ass] and [Hit-Girl] in separate books as they're very different characters who need different types of stories. [Kick-Ass] is very grounded with a tremendous confidence. The character plays by superhero rules because the character is a comic fan. But [Hit-Girl] is basically tiny Frank Castle, so you can't do that every month, where one is knocking people out and their partner is shooting them in the face.

Oh it's an ongoing. Both titles are ongoing monthlies. The second year of [Kick-Ass] is already being written, and I've bought three years worth of [Hit-Girl] all at once. There's some great creators in there. All my favourites. I'm pretty much just commissioning beautiful books I want on my own shelves. This is going to be mega. There's a lot going on in the background too which you'll hear about over the next few months.

There you have it! Straight from Millar himself. Fans can expect more of what they love from Hit-Girl and company in February 2018.