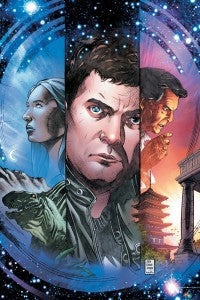 , the digital-only comics based on the fan-favorite (but ratings-challenged) FOX series Fringe, will finally see print as a collected edition coming in September, according to TV Guide. The show, which was recently renewed for a final season beginning in the fall, has a dedicated fan base who have made the series one of DC's best-selling digital products. "With [the fans] helping me avoid some things and [plant] other things, it just gives the fans something they can recognize...if they [look] that deeply," Invader Zim executive producer/writer Jhonen Vasquez, who wrote a number of the comic's 12 chapters, told TV Guide.  "Which I know they do!" He added, "I'm a huge fan of Fringe, so I kept my story pretty anchored to the show. I didn't have characters flying around or becoming ninjas." That might seem a fairly random comment for Vasquez to make, except that the webcomic was chock-a-block with what-if, alternate reality stories that inform, but do not tie directly into, the TV series' main continuity. Expect to see the final release information and price for the book released with the rest of DC's solicitations on Monday. It will be released on September 5.

Fringe Digital Comics From DC To be Collected In Print Edition