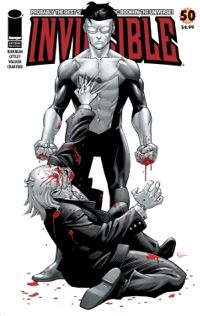 Even though Invincible #50 had a record print run for series, the issue has sold out at distribution. Image has announced that a second printing is on the way in order to meet fan demand for the comic. "Fans sure do love it when the book hits the fan," said writer Robert Kirkman. "Issue fifty altered the series in a way we haven't seen since Omni-Man's true nature was revealed and people have really taken notice. I think a lot of people will be even more surprised by what's next." Invincible #50 was an oversized issue that included an extended lead and bonus stories. The issue revealed the origin of Cecil Stedman and included an all-new edition of Science Dog with art by Invincible co-creator Cory Walker. The second printing will be a limited edition with a modified logo. Invincible #50 second printing will be 48 pages and will retail for $4.99. Also, Invincible #51, which will feature Invincible's new costume, will be overshipped to help meet fan demand.