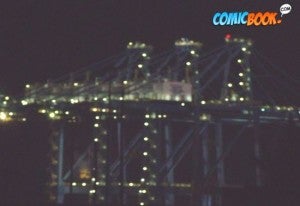 Iron Man 3 is looking for a man they can stick up on that rig we've been seeing the last few nights at North Carolina's Port of Wilmington. A new notice just went up at the Caged Heat Casting Facebook page, asking for the following:

Of course, yesterday it seemed as though they were looking to cast a stand-in for Gwyneth Paltrow's Pepper Potts, as they were asking for a slender, athletic woman, preferably blonde. This description could describe virtually any male in the movie, and that assumes they aren't just looking for something like "soldier #2," so even assuming that people were guessing right yesterday, this new notice tells you nothing about which cast members might be shooting along with Paltrow on the docks (the permit says three stars, ten extras).

Iron Man 3 is currently filming in North Carolina, Florida and China, with its eye on a May 3 release date.