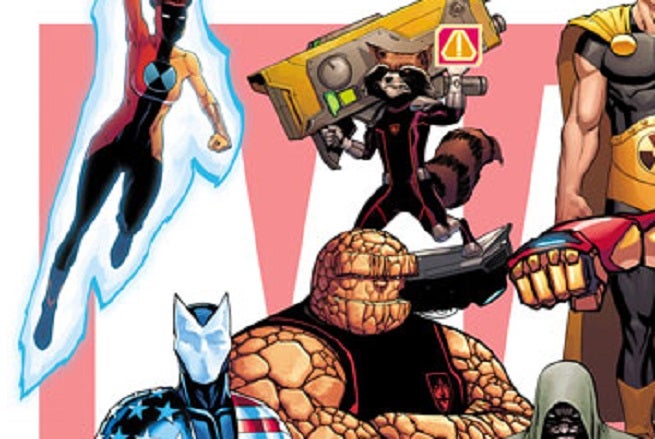 With the release of a second, game-changing "All-New, All-Different Marvel" teaser, the publisher revealed that Benjamin J. Grimm's poker games are going cosmic.

The ever-lovin', blue-eyed idol o' millions will join up with the Guardians of the Galaxy following the end of the long-running Fantastic Four comic book series -- a role which sees him hanging out with fellow rough-around-the-edges heroes like Star-Lord and Rocket Raccoon. In the image above, you can see The Thing and Rocket wearing matching uniforms with the logo of the Guardians.

With Johnny Storm on The Inhumans and Doctor Doom presumably taking a break after serving as a major threat in Secret Wars, the last remaining members of the team to be accounted for post-Secret Wars are Reed and Sue Richards.

The Thing joining the Guardians of the Galaxy is a bit of a departure for the All-New, All-Different Marvel. An initiative that seems to closely mirror Marvel Studios' film and TV universe, it seems that characters not owned by Marvel Studios (notably the Fantastic Four and X-Men) are being downplayed somewhat in favor of characters Marvel DOES own. Meanwhile, the Guardians of the Galaxy have become fan favorites following a feature film that exceeded even the most enthusiastic expectations from both a critical and financial point of view.

Is The Thing Joining The Guardians of The Galaxy?