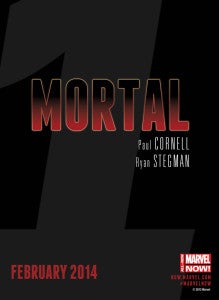 Paul Cornell made Wolverine "killable" this year--and now there's a teaser for a Cornell book that's "Mortal." Could the two be connected? Seems likely. Otherwise he's just kind of going back to the same well in a new title. Featuring a big #1 in the background, it suggests a new series, but Marvel hasn't been shy about using those #1's pretty liberally in the corner boxes of Marvel NOW! titles that are getting a creative and/or direction change as part of the big All-New Marvel Now rollout. Whatever it is, it's coming in February with Superior Spider-Man artist Ryan Stegman.

Is Wolverine Both Killable AND Mortal?