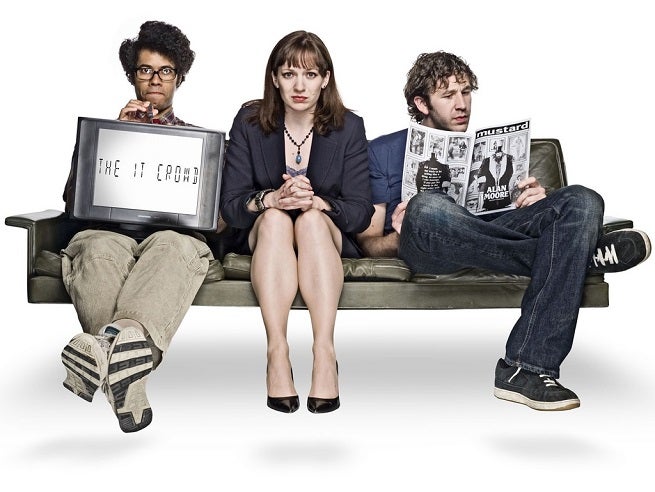 For the second time in less than ten years, NBC has committed to a pilot for a remake of the fan-favorite U.K. comedy IT Crowd.

This time, it will come from Scrubs and Community veterans Bill Lawrence, Neil Goldman and Garrett Donovan.

By which we mean, the three worked together on Scrubs and then went their separate ways, with Lawrence developing a number of new series through his Doozer Productions studio, most notably Cougar Town for ABC (then TBS), Ground Floor for TBS, Undateable for NBC and the upcoming Rush Hour TV adaptation with Brett Ratner. Goldman and Donovan went on to work with showrunner Dan Harmon on the cult-favorite Community, about to enter its sixth season having transitioned from NBC to Yahoo! Screen.

Deadline notes that when NBC last tried to make an American adaptation of The IT Crowd, it had a midseason commitment before the project fell apart. At that point, it starred Joel McHale, who would go on to star in Community.

The original IT Crowd, which starred Chris O'Dowd, Richard Ayoade and Katherine Parkinson, premiered on Channel 4 in 2006 and ran for four seasons plus a special. It earned a best comedy BAFTA, International Emmy and Golden Rose awards.

As one of the best-loved comedies in a decade, all three stars went on to do very well for themselves at home and abroad; comic book fans may recognize O'Dowd from his much-speculated-about role in Thor: The Dark World.

Lawrence was the creator and showrunner on Scrubs; Goldman and Donovan came on after the pilot and remained throughout the run, becoming instrumental to the show's success.

The IT Crowd creator Graham Linehan is on board for this one, Lawrence assured fans on Twitter last night, and Linehan himself went on to reassure fans that he was closely involved and they were "going to get it right."

The IT Crowd To Be Remade By Scrubs and Community Producers