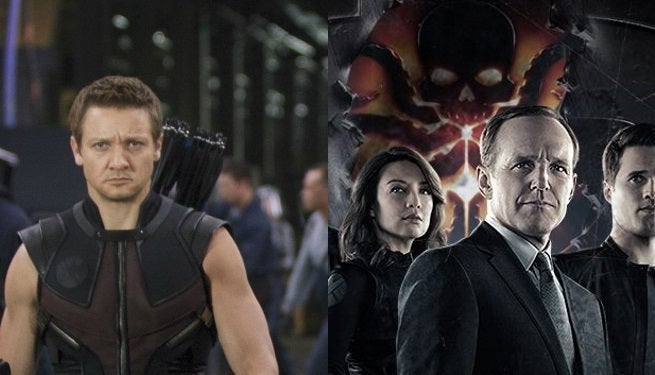 The second season of Agents of S.H.I.E.L.D. will introduce the character Bobbi Morse, a.k.a. Mockingbird, to the Marvel Cinematic Universe.

In the comics, Morse romantically involved with Clint Barton, a.k.a. Hawkeye. Naturally, some have wondered if her inclusion in the series could lead to Hawkeye making an appearance on the show.

While he doesn’t address the Mockingbird question directly, Renner did say in an Ask Me Anything on Reddit, there there’s an outside chance he could appear on Agents of S.H.I.E.L.D.

I guess, again - those are questions that are tough to really answer, because it's above my pay grade, haha! It's not something I sit and think about. But I suppose if it was offered up, there's an outside chance it could happen. I haven't seen the show, so I don't know how it works, but I'm sure the folks at Marvel have ideas, and when they're strong enough, they'll bring 'em to me. But I love me some Clark Gregg, he's so great. We killed him and brought him back to life to do Agents of S.H.I.E.L.D., he's so good!

Jeremy Renner Says There's An Outside Chance He Could Appear On Agents Of S.H.I.E.L.D.