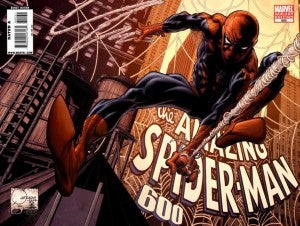 One of the great things about comic book fans is that there's always somebody who knows EVERYTHING about some subject or other, so if you look long enough, you can put together the pieces of almost any semi-coherent puzzle a writer lays out for you.

And so it is again, as Bleeding Cool seems to have pieced together a theory that makes quite a lot of sense regarding the upcoming Superior Spider-Man...and which, as an added bonus, plays to the absence of Reed Richards that we noted yesterday in a story on the subject.

What's the theory? Well, that the secret to Doctor Octopus's invasion of Peter Parker's body and possibly the key to Peter's salvation can be seen in The Amazing Spider-Man #600, the issue that saw Peter squaring off against Doctor Octopus against the backdrop of May Parker's wedding to J. Jonah Jameson's father.

In the issue, Doc Ock used a cerebral control unit to launch an army of octopus drones which took over New York's power grid, granting him control over the city's technology. He claimed that his objective was to memorialize himself (he had just found out he was dying) by doing something great for New York, but his fractured mind was losing control of parts of the system, which were being steered by Ock's subconscious to attack Spider-Man, and also Jameson, as Ock wondered what life might have been like if he had married May Parker those many years ago when they were engaged.

As Reed Richards prepared a similar unit that deploy into the city which would allow Richards to stop Dr. Octopus by launching "a more powerful brainwave" or something of the sort against the threat, Peter Parker got his hands on Doc Ock's original and stole Reed's plan, albeit using Peter's own brain, rather than Reed's.

Which is where it gets interesting--Peter says something about having to upload his brain's "fingerprint" into the system in order to do so, and while Richards assures him that he's got technology working to eradicate the threat to Peter's secret, Doctor Octopus also had contingency plans in place to keep his octo-drones operating after he lost control of the helmet and the power grid. Who's to say he didn't also backup the main system controlling his plan (especially since he was hoping that the "improved" New York City he was creating by trying to guide it with his mind would outlive him)?

This is supported somewhat by the way Doc Ock seemed to be accessing Peter's memories in Amazing Spider-Man #698. It was very much like a computer would do--opening a "file" on the person he encounters and accessing the memories of that person, rather than the kind of spontaneous recognition that would come from a more organic use of the brain.

Of course, if this process is key to Doc Ock's master plan, it's equally likely to be his undoing. The whole premise of #600 was that he believed himself to be the most powerful mind on the planet -- someone that couldn't be pushed out of the driver's seat by the lesser minds all around him. Peter's already done it once, though, and while it may be harder for him to pull it off a second time, there are any number of more brilliant minds and/or stronger wills in the Marvel Universe, including but not limited to characters like Kurt Connors and Norman Osborn, who sometimes encounter the body Ock is currently inhabiting.

Even in the absence of Reed Richards, something we've come back to a couple of times in our discussions of the story and what might be coming next, fans are still left with a world in which we've seen he had a working (or mostly working) helmet ready to go, which gives a pretty clear "out" to anyone looking to short-circuit Ock's control of Peter Parker's body. Of course, assuming that this is what happened, the question stops being "how did he take over?" or even "How do you beat him?" and becomes something more along the lines of, "How did he do the whole body-swapping thing?", which seems like it might be the hardest thing to duplicate...and if they don't duplicate it properly then one or both of the minds involved may end up disembodied.

Of course, there's always the possibility that Peter's brain will infect Doc Ock's system like a virus, with the stronger brain (Peter's) slowly overtaking the weaker one (Ock's), which will remain in control only as long as it can hang on. That could, of course, be the premise of the superior Spider-Man, with "Superior" being a result of Doc Ock's ego and the character's brutal efficiency being the result of a decidedly different moral code, at least at first.

Latest Amazing Spider-Man Theory Seems to Have Got It Right