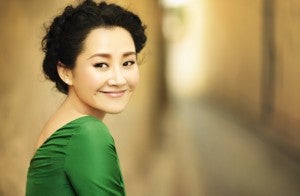 Summer Qing, who plays the wife of Bruce Willis's character in the just-released Looper, is no stranger to film, but it's likely most of our readers haven't seen her.

Despite roles in films like The Emperor's Shadow, Flash Point and The Founding of a Republic, Looper is Qing's first starring role in a big Hollywood film, breaking up a schedule of historical epics and ambitious theater productions with a critically-acclaimed sci-fi drama where two of Hollywood's brightest stars square off--in spite of being time-displaced versions of the same man.

Qing joined ComicBook.com via e-mail to discuss her thoughts on Looper, her co-stars and why her next project isn't listed on IMDb yet.

How is it different being on set for a big American project like this as compared to some of the smaller films you've been seen in?

I guess we are talking about “size” again. [Laughs]

Actually I have been on some quite big Chinese projects such as The Founding of a Republic. That being said, still, I don’t think size really matters.

Again, I don’t think that between working on a Hollywood production and a Chinese one, one is better than the other. What does matter is to have a great team, which, I’m glad, Looper is proud to have, and I’m honored to be a part of it.

And what's the difference in doing a movie like this on a Hollywood budget versus something like Flash Point, which was also big action, big stars and everything, but which probably cost about 1/20th the money to make?

I would insist my answer to the last question for this one. Big Hollywood budget or small Chinese budget or the other way around, doesn’t change the fact that only a good team’s collaborative effort could make great films. There is no difference.

What sort of movies are you most comfortable working on?

I am most comfortable--actually I could only be comfortable--when people I’m working with have the compatible QI field (QI field is a Chinese term that could be understood as the energy field). I had thought I would encounter some trouble working in Hollywood the first time. Surprisingly, the QI field was amazingly perfect!

As someone who isn't from the U.S., do the film noir influences of a movie like Looper translate, or did you have to watch a bunch to prepare? I'm never sure when things that are a staple here don't make the transition.

Good films are international. Film noir isn’t a strange concept to me. Actually it has quite a large fan base in China.

I graduated from Beijing Film Academy. Film noir was definitely covered in my education. [Laughs] 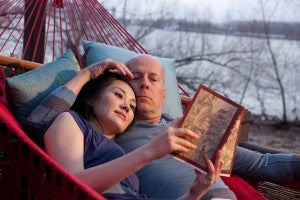 Again, coming from aforeign perspective, how was it to work with Bruce Willis? Here, he's enormous.

Working with Bruce Willis is one truly great experience. I had imagined that there would be some kind of cultural gaps and communication problems due to our different backgrounds. But it turned out that Bruce and I worked perfectly together!

I will never forget the first day I arrived on the set. He came to me, pulled me into his arms, and gave me a big long hug. He didn't say a word but that said more than enough. We were like an old couple finally reunited, ready to take on another adventure in life. It was so romantic and emotionally intense. From that day on, I have only seen the loving and caring Bruce on set, for which I am very grateful. 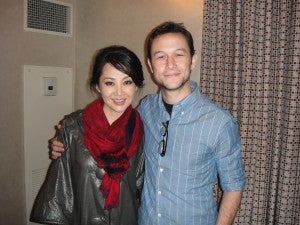 Did you get to work much with Joseph Gordon-Levitt?

JGL and I didn’t have screen time together this time. But when he came to China for filming, we had fun doing the publicity work for the movie. He is a really nice guy, a boy next door. I hope we can work together again.

Was this movie a strange one to work on? You've got two people playing the same character, and I imagine that can be hard to follow in the script!

Not at all. My character only has screen time with Bruce. Even if I had to follow two people playing the same character, I didn’t see why it would be a problem. I have confidence that the director will be able to guide us through without any confusion.

Do you know what your next project is yet?

I will be working with the best Chinese playwright and theater director Stan Lai on an 8-hour-long play, which will be a groundbreaking cultural event in Asia. At the same time, there are a few international film projects under development and/or in negotiation.