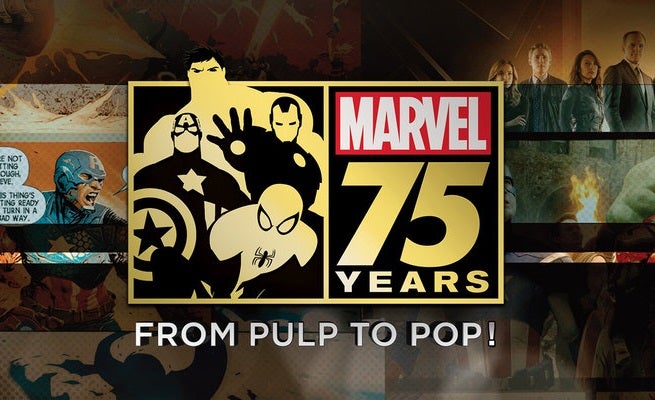 In celebration of Marvel’s 75th anniversary, ABC will tonight air a special retrospective on the company, titled Marvel: 75 Years, From Pulp to Pop!

In Marvel: 75 Years, From Pulp to Pop!, experience an exciting journey through the 75 year history of the Marvel Universe, from its humble beginnings as Timely Comics in 1939 to the birth of The Marvel Age in the 1960s, and finally the cinematic blockbusters of today.

Marvel has pioneered and broken box-office records around the world, creating a universe unlike any other in pop culture history through its comic books, television shows, video games, animation and blockbuster films. Marvel made its foray into the film world with Iron Man in 2008 and continues its entertainment domination today with Marvel’s Agents of S.H.I.E.L.D. on ABC and the upcoming Marvel’s Agent Carter, and the recent theatrical releases of Marvel’s Captain America: The Winter Soldier and Marvel’s Guardians of the Galaxy, as well as the highly anticipated upcoming film, Marvel’s The Avengers: Age of Ultron. The Marvel Cinematic Universe translates the excitement of the comic books to a whole new audience with some of the most groundbreaking and dynamic storytelling that brings an unprecedented vision to the world of entertainment.

But how was the Marvel Universe formed?

The special takes a look at Marvel’s roots, beginning in 1939 as Timely Comics with Martin Goodman and Stan Lee emerging as key figures in Marvel’s history in the 1940s along with the creation of Captain America, the impact of World War II and the decline of super hero stories and the subsequent downfall of the comic book industry in the 1950s. After a decade of decline, Stan Lee and Jack Kirby created the modern super hero team in 1961 with the Fantastic Four, helping to bring back superhero stories and ushering in “The Marvel Age,” which saw the creation of the Hulk, Iron Man, The X-Men and Spider-Man. A shift in the character paradigm in the 1970s also brought culturally relevant characters such as the Black Panther, Falcon, Black Widow, Luke Cage and Ms. Marvel to the forefront . But the mid-1990s were not so kind to Marvel as the company fell into bankruptcy. However, a new batch of creative visionaries brought about a modern day renaissance, revitalizing publishing. Soon after Marvel saw its characters and stories take over the silver screen, and Marvel Studios was born, leading into today’s successes on the big screen and television.

And don’t forget, Marvel will debut new footage from Avengers: Age of Ultron sometime during the special’s airing.