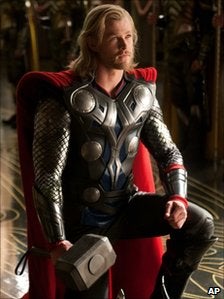 'Thor 2' recently picked up a new director, Alan Taylor, to replace former director Patty Jenkins.  And it didn't take the Game Of Thrones director long to make some changes. According to Deadline, Taylor hired Robert Rodat--yes he of 'Saving Private Ryan' fame--to rewrite the script to 'Thor 2.'  The most recent draft was written by original Thor screenwriter Don Payne.  No word was given as to why the addition of Rodat, but you can probably guess.  There are two reasons why rewrites occur: 1, the script sucks, or 2, there is a major internal power struggle going on between some folks. Either way, Rodat is a curious choice for the job.  Outside of creating the TV series 'Falling Skies,' Rodat hasn't done much in film recently.  Heck, the last film he wrote was 'The Patriot,' starring Mel Gibson and Heath Ledger.  So who knows what to expect?  Taylor must have chosen Rodat for a reason, and I'm guessing it's because he thinks the writer can bring his vision to the screen. What do you think about the selection?  Does this make you less or more excited about 'Thor 2?'