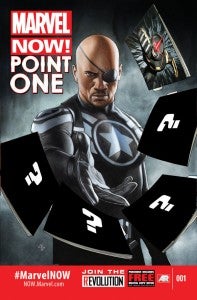 Aww, look at that! Just like his daddy! That's right, folks, Nick Fury. Jr. is tossing a hanful of cards at you--possibly in disgust because you let one of his best men get killed--on the cover of Marvel NOW! Point One. And what does it reveal? Well, Marvel NOW!'s architects are supposedly being revealed, one at a time, on a series of cover teasers featuring that image. Yesterday appeared to show a redesigned Cable, while today's image is most certainly Nova, the hero featured in Mark Waid and Stu Immonen's designed-for-digital story attached To Avengers vs. X-Men #1. Check out the official description below, and keep your eyes out for this issue in October. MARVEL NOW! POINT ONE #1 Written by BRIAN MICHAEL BENDIS, MATT FRACTION, JEPH LOEB, NICK SPENCER, KIERON GILLEN, DENNIS HOPELESS Art by MICHAEL ALLRED, ED MCGUINNESS, STEVE MCNIVEN, JAMIE MCKELVIE, SALVADOR LARROCA and LUKE ROSS! Cover by ADI GRANOV ON SALE OCTOBER 2012