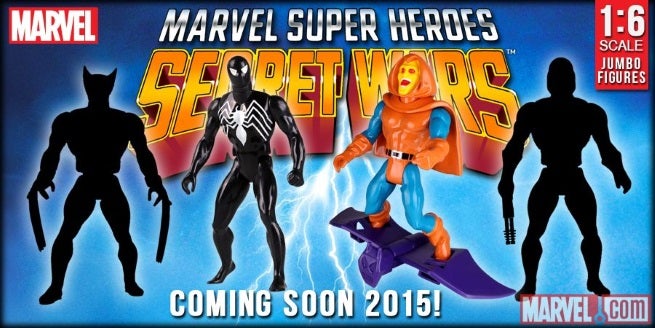 Gentle Giant Ltd. Will release a line of Secret Wars throwback figures ahead of next year’s Secret Wars comic book mega event, as revealed at Marvel.com.

The original Secret Wars series ran from May 1984 – April 1985, and tied into a line of Mattel action figures, depicting the Marvel Comics character who were fighting it out on Battleworld at the behest of the Beyonder.

Gentle Giant will reproduce those original Mattel figure at a 12 inch scale, and package each figure with a Secret Wars-inspired backer card featuring original photos and artwork.

Gentle Giant has already revealed Black Suit Spider-Man, who is available for pre-order now, and the second figure released will be Hobgoblin. Two more silhouetted figures were also shown. One seems to pretty clearly be Wolverine, while the looks to be Kang the Conqueror.

Check out the images in the gallery below.