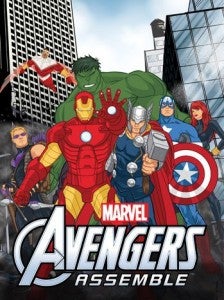 Disney XD have released a new clip from this weekend's episode of Marvel's Avengers Assemble, which you can see in the embed below.

The series, which brings together the Avengers team from the hit motion picture, is already doing something that the movie never had a chance to: DOING SOMETHING with Black Widow and Hawkeye!

Check out the official teaser text and the video below.

It’s the most anticipated new animated series to launch this year and this Sunday, Marvel’s Avengers Assemble takes Marvel’s most iconic Super Heroes – Iron Man, Thor, Captain America, Hulk, Hawkeye, Black Widow & Falcon on another action packed mission like no other! Tasked with saving  the Marvel Universe from the biggest threats they’ve ever seen Earth’s Mightiest must band together to take any threat to the Marvel Universe! Hawkeye and Black Widow take on a covert S.H.I.E.L.D. mission to bring in the son of a super-villain, but when he’s revealed to have a world-bending weapon, they realize keeping their mission a secret may be a fatal mistake!

Don’t miss the next amazing episode of Marvel’s Avengers Assemble this Sunday at 12p/11c inside Marvel Universe on Disney XD.