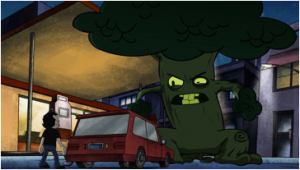 You probably know Maurice LaMarche from his work on The Simpsons, Futurama or Ultimate Spider-Man...but just few weeks ago, he was playing a broccoli monster on Dan Vs. for The Hub. And, no, it really wasn't anything like his regular monster gig, Morbo the terrifying alien newscaster on Futurama. LaMarche joined ComicBook.com to talk about his impressive career and what it's like to be the guy who has to do all the wacky voices on a show like Dan Vs. or Ultimate Spider-Man, where many of the characters are just basically talking like themselves. ComicBook.com: You are really interesting as a fit for the show, because while just about everyone else on the series does a variation on their own voice, you're obviously a guy who is employed to do a series of over-the-top voices. Maurice LaMarche: Well, you said something very key--you hire Dave Foley, you get Dave Foley. You hire Curtis to get Curtis and Paget's wonderful; she's got that sweet, wholesome kind of voice. It's really rich--there's so much texture to Paget's voice; it's girly and it's womanly and it's great. But when you hire me, you're doing it so you can three for the price of one. Very rarely do I do anything talking like this--this is the way I talk day in and day out, and I don't think I've ever done this in a cartoon. The closest thing to my real voice is my Lexus commercial, which is me, the way I talk when maybe I'm just whispering in someone's ear. It's almost like a bedroom voice, you know? Yet it's stern and it's informed, but that's the closest thing to hearing me talk. But on something like Dan Vs., I walk in and the director will say, "Okay, today you're a broccoli monster and an army colonel and a vegan, sort of Whole Foods-type shopkeeper. Go!" I've got to be three very different guys, find each of these guys inside me, and in the case of the broccoli monster I've got to be both frightening and pathetic. For me as an actor, I actually love that--it's almost like a British theater kind of approach of sort of disappearing into a character. The American way is to sell your personality and be a personality, you know? Tom Cruise is Tom Cruise in pretty much everything he does, which is why I loved what he did in Tropic Thunder. That's why when Tom Cruise disappeared into that agent guy in Tropic Thunder, that's when he got me. Tom Cruise got me with that picture because he was something other than being Tom Cruise. I admire that he can climb buildings and he does his own stunts and everything--that's great, that's something I can't do--but that idea of being something other than you but finding that person in you is the fun of acting. I get to do that without having to sit for four hours in prosthetics. 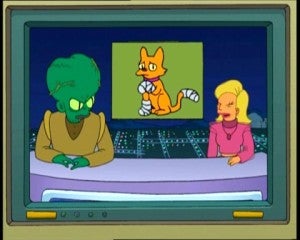 ComicBook.com: For me, the most consistently entertaining animated role--a character where every time he comes onscreen you just know it's going to be funny--of the last fifteen years is probably Morbo. LaMarche: [Laughs] I was sure you were going to say The Brain. That's funny! But yeah, Morbo...everything that comes out of Morbo's mouth is intriguing and hilarious, which is great--the magic 1-2 punch there. ComicBook.com: Do you kind of draw off a character like that when you're a broccoli monster who's kind of pathetic? LaMarche: Well, with the broccoli monster, I used a different part of my pipes, you know? [Affects Morbo's voice] Morbo is just straight-up yelling like this! [Resumes normal voice] You know? What makes Morbo funny is the stuff that the genius writers on Futurama put in his mouth, you know? [Affects Morbo voice] Windmills do not work that way! [Resumes normal voice] I mean--it's just the interplay with the human Linda that's hysterical to me with Morbo. But with the broccoli monster, he was onscreen a lot longer. We've never done a Morbo episode, where we follow Morbo around. He's great for little blackouts and stuff like that but with the broccoli monster we had to watch his creation, see him connect with Dan as a father, then try to kill him and then as he faces his end play the pathos of crying out one last time for his father. It's almost like going through an entire life in three, three and a half minutes. Because we start out admiring our fathers and then we go against them in our teenage years and then we need them again at some point in our adult lives. But with the broccoli monster, it's extra pathetic because Dan's eating him--and who worse could he turn to for help than Dan? ComicBook.com: You're playing three characters in a given episode. How do you play the relationships between your characters and the rest of the cast? Do you ever have to kind of fight yourself? LaMarche: Yeah, I couldn't give you an episode number or chapter and verse where I did it but yeah, I've had to play somebody on both sides of an argument or a conflict. That's happened a few times. And yeah, it does make you feel a little bit split-personality but it comes with the job. ComicBook.com: On Dan Vs., is it weird to play the central antagonist in an episode when the central conceit of the series is that Dan is kind of the central antagonist of his own life? LaMarche: It's interesting that you'd say that because to me, Dan is the antagonist-protagonist. You're with him and yet you're watching the show going, "Man--you're such an a-hole." But he's your central character and he's also fighting against that--you know, who loves vegetables really? Here's the thing--whenever you're playing the villain or the antagonist, you can't play them as though you're playing the antagonist. You always have to play as though you are right. When James Earl Jones played Darth Vader, he played him as though he was right. You can't play a villain as if he's the villain; you have to play him as if he's fighting for something that only he believes is the right thing and everybody else is deluded. That the destruction of the rebel base is really the best thing for the entire galactic Empire, you know? There's a moment in the Dan Vs. episode where the vegans are all gathered together and they're all starving because all of the vegetables have been destroyed--and he turns and says "We must be strong as vegans!" But there's one vegetarian there and he looks down his nose at the vegetarian because his commitment to veganism isn't strong enough. I just thought that was a funny moment in writing that I hope I brought what it needed in the acting. With VeganVic, I absolutely didn't play him as a buffoon; I played him as a guy committed to a cause. ComicBook.com: Now, you referenced Star Wars. What's a voice you'd like to do in that universe? LaMarche: I did do a one-off video game project. I think it was one of those online video games that was tied into merchandising and I got to play Admiral Ackbar. So that was fun. I got to actually be one of the people who said, "It's a trap!" But obviously Vader would be a great character to play. I don't have the pipes for it, but I have the milk shake cup for it. That's the way to do Vader is you take a metal milk shake cup and you hold it just off your mouth and [inhales] - and you've got a Vader impression!