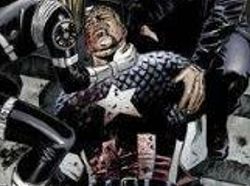 Memorial Day is a day when America honors the fallen members of its armed forces. In honor of Memorial Day, Comicbook.com decided to take a look at some of the greatest war heroes in comic books. While most of the members of this top ten list of comic book war heroes fought for the red, while, and blue, a couple of them might prove controversial, because they were fighting on the wrong side of history. In addition to individual warriors, we also included a couple of elite fighting teams. One thing that is fairly consist about war heroes is that most of them wind up dead. Unlike superheroes who just get their origins updated every decade or so, war heroes are usually tied to a specific war and time in history. While there have been some attempts to re-vamp war heroes into other eras, most of them remain best known for their particular wars. War heroes typically die in their wars, and only occasionally live into modern eras. Unless of course, they take an Infinity Serum or get frozen in a block of ice.

10. The Losers – The Losers were originally a special forces group that fought during World War II. The Losers included Captain William Storm, Johnny Cloud, Sarge Clay, and Gunner Mackey. The group deemed themselves The Losers because they each had suffered the deaths of personnel under their command for which they felt responsible. While there have been a couple different fates presented for The Losers, one popular version of their deaths has them killed in action in 1945. A modern, re-vamped version of The Losers revolves around a special forces team that conducts covert operations against the C.I.A.

9. The Unknown Soldier – There have been a couple different versions of the Unknown Soldier over the years. The most well-known version of the popular DC Comics character focused on a World War II soldier whose face was so severely disfigured that he wrapped it completely in bandages. The Unknown Soldier was inspired by the words of his brother, who told him that “One guy can affect the outcome of a whole war! One guy in the right place at the right time."

7. Airboy – Airboy is an aviator hero from the World War II time period. His original adventures were published as part of the Golden Age of comic books, but an updated version of the character was also published by Eclipse Comics in the eighties. The original Airboy was David Nelson II, who utilized a highly maneuverable prototype aircraft to help the allies during World War II.

6. Enemy Ace – Enemy Ace was the subject of some of the greatest war stories ever printed by DC Comics. Unfortunately, he was fighting for the wrong side. Enemy Ace was a skilled but troubled German flying ace during World War I. His name was Hans von Hammer, and he was loosely based on the real-life Red Baron. He flew a Crimson Red Fokker DR1 Triplane. During World War II, the Enemy Ace was outraged by the atrocities committed by the Nazis, and he helped Jews escape the Nazis.

5. Sgt. Fury – While most modern day readers might know Nick Fury as an agent of S.H.I.E.L.D., Nick Fury started out as the cigar-chomping Sgt. Fury, who was a World War II military hero. Sgt. Fury led an elite U.S. Army unit known as the Howling Commandos. Nick Fury is one of the few comic book combat veterans who still survives in comic books today, thanks to the Infinity Formula slowing his aging.

4. Jonah Hex – Like the Enemy Ace, Jonah Hex was fighting on the wrong side of history. Jonah Hex was an officer for the Confederacy during the American Civil War. Hex fought at Gettysburg and is most often depicted in a tattered Confederate States Army jacket. Jonah Hex also has the distinction of having a horrible scar on the right side of his face. In addition to being a typical western anti-hero, Hex has also traveled to the future to become a Mad Max type warrior and battled zombies in western-horror stories.

3. Sgt. Rock – The most famous war hero comic book published by DC Comics. Sgt. Rock fought in the infantry branch of the U.S. Army during World War II. He led a unit called Easy Company, which consisted of a memorable group of soldiers. While the eventual fate of Sgt. Rock is up for debate, the most common belief is that he was killed on the last day of World War II by the last enemy bullet fired.

2. G.I. Joe – OK, so G.I. Joe was originally an action figure line, but the team is also one of the longest running and best military comic books ever. In Marvel Comics, G.I. Joe wasn’t about any one individual, but focused on a covert special forces group. G.I. Joes were the best military recruits, and they fought menaces such as Cobra with high tech military equipment. Original G.I. Joe team members in the Marvel comic series were Hawk, Stalker, Breaker, Clutch, Scarlett, Snake-Eyes, Rock ‘n Roll, Steeler, Grand Slam, Flash, Short-Fuze, Grunt and Zap. While the Marvel series might be the best known, several other comic book publishers have also published G.I. Joe comic books.