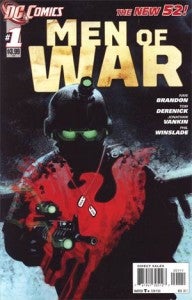 For just over three years I worked part-time in a comic book shop and loved it (shout out to Ultimate Comics in Durham, NC here!). As anyone who has worked in a comic book shop will tell you, you get a lot of interesting requests in any given day. Some you can easily and happily meet and others, well, you do what you can and hope for the best. One that recurred with some frequency was customers that I had never seen before coming in and looking specifically for Sgt. Rock books. This happened with men, women, veterans, civilians, and people of varying ages. The character is well-regarded and known, and it always made me happy to help them locate a volume of his adventures or a back issue they had to have. Fans of the character will have reason to celebrate, as the character has made the leap into the new DCU in Men of War, a mostly smooth tale of military grit and a man's rise to authority.

One thing that stands out about this opening issue is the artwork and the inks, courtesy of Tom Derenick and Matt Wilson respectively. There's an appropriate starkness to Derenick's artwork, that focuses on angular and sharp lines and lots of restrained men who explode from the page with emotion or violence when needed, which feels appropriate given the military subject matter. Wilson's various shades of brown, orange and yellow are nice touches that add to the gritty feel that most of the issue has. The opening scene takes us into the heat of battle, with Rock appearing stuck between a, forgive the saying, rock and a hard place. We cut back to just how we got here, as Rock gets a dressing down over his disobedience, insubordination and his heroism, surprisingly enough. His superiors seem willing to make him a sergeant, but he seems content to be the defiant soldier, being there for the other men and gaining victory more than anything else.

This scene feels a little typical of the "you're such a pain in our butt but we can't get rid of you" motif that feels very common in today's film, tv and other mediums for fiction. While the story as a whole seems to be about the men in Rock's unit, who are subsequently dispatched on a mission to infiltrate an insurgent-controlled area, which has a mighty hostile way of welcoming the force as they descend from a plane into the front. Even though Rock has refused to take the next step up in leadership, he is forced to when his leader falls in the fighting that ensues once the troop hits the ground. This was a puzzling issue for me, because while I could see that corporal Rock was going to step-up to his more famous title, I never felt like I got a good sense of who he is, which felt a little strange for this first issue. A solid back up story called "Navy Seals" is also pretty effective, and there are several references to real military terms and weaponry, with handy guides for civilians who don't know what those abbreviations mean, to add some authenticity, even though it's piled on a little thick in a couple of places. Overall, this is an interesting maiden voyage for a rugged soldier. Grade: B