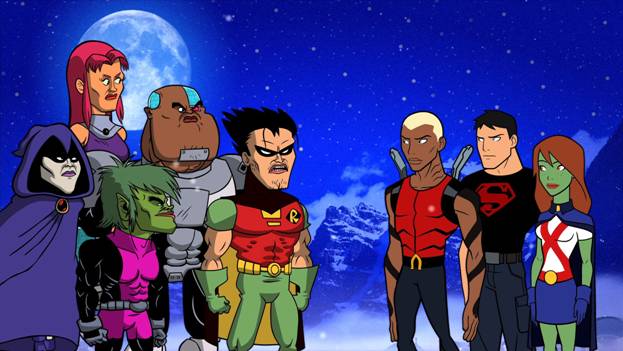 Nothing lasts forever, but don't tell that to the still-seething fans of Young Justice. After the dramatic serial starring DC Comics' teen superheroes was swept under the rug in 2013 for the goofy Teen Titans Go! series, which traded high stakes for gags about evil vegetable gods, Young Justice's fanbase swarmed the Internet in protest. But as the vitriol percolated across message boards, Teen Titans Go!'s rating crept higher and higher. Clearly, the majority didn't mind sacrificing seriousness for shenanigans.

But now, the super-serious Young Justice cast—and in spirit, its fans—are striking back in tomorrow's episode of Teen Titans Go!, "Let's Get Serious." In a universe and continuity bending scenario, Young Justice's Aqualad challenges the Looney Toons Titans to put down the video games and act like actual heroes. The episode may seem like a moment of triumph for Young Justice, but ask executive producer Michael Jelenic, and he'll tell you it's another excuse for the Titans to go bonkers. 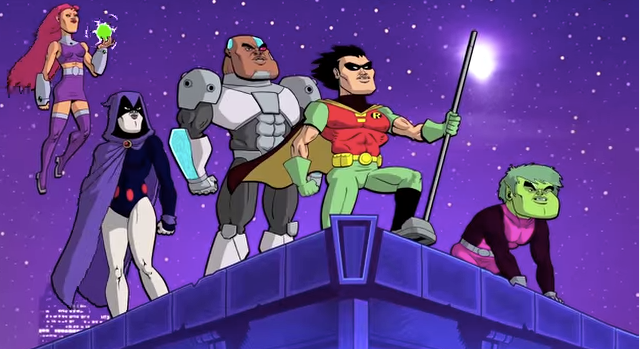 Feeling inadequate against the straight-laced Young Justice crew, Robin and his Titans get real the only way they know how—by taking their seriousness to the extreme. Transmographying themselves into 80s caricatures that Frank Miller could love, the veiny, proclamating Titans swear total vengeance on all evil-doers like, says, whoever who drank the last juice box.

"These characters are goofballs, so they become serious about all the wrong things," Jelenic said. "They act how they think super-serious superheroes would. Nobody actually becomes more serious in the episode; it's just them trying."

Bridging the gap between the crime-busting and salty codger jokes is Cyborg voice actor Khary Payton, who played Aqualad on Young Justice. By giving Payton the reins to one squad's leader and the other's resident cheeseball, Jelenic said that the actor fueled some of the episode's funniest moment. In one scene, Jelenic said, Cyborg and Aqualad share an exchange that's only made more hilarious by the behind-the-scenes knowledge. 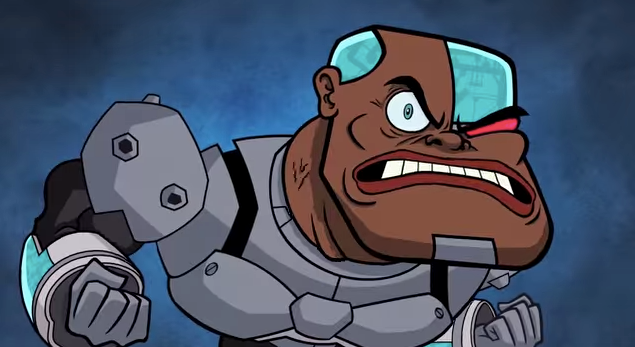 When the episode is all said and done, the Titans still won't learn anything from their Young Justice crossover. But that's the point. Teen Titans Go! is unapologetically silly, and no one—not even their law-abiding counterparts, can derail their delinquency.

"We have a segment out there who want their superheroes to be serious. I think there's a view that if you're going to do comedy, there's better media or superheroes to play with comedically," Jelenic said. "We were reluctant to use Young Justice, but it felt like they just worked so perfectly for the idea of the team becoming serious. And at the same time, Young Justice lets us poke fun at ourselves for what people see as our failings on the show."

Even as the bullseye for Young Justice fans' online anger, Jelenic stands by his pizza-scarfing Titans. He thinks that most super hero cartoons forget a basic fact: These shows are made for kids. While the executive producer strives to create a show that pleases both longtime fans and their children, Jelenic said that he always makes younger viewers' needs his top priority.

"We'll get pretty weird and pretty meta, but we're always asking ourselves, 'Will a kid get this? Is this silly of fun enough for a youngster?'" Jelling explained. "It's always in the back of our minds."

If anything, Teen Titans Go's! ratings success—which far outweighs the Twitter hate—only proves this: The Teen Titans are an iconic franchise that fans will always flock to regardless of their rendition.

"I think this show cements the Teen Titans as a property that's almost like Batman. There's so many different interpretations of the Titans, but people will still come to these characters because they like them so much," Jelenic said. "Once this show goes off the air, I'm sure there will be another Teen Titans series to follow, wether it be serious or comedic."

So whether Robin, Starfire, and the group tackle a crisis of infinite proportions or a messy bedroom, they will always remains the Titans. As Jelenic and his team of comedy writers keep pushing the envelope, he remains confidant—despite the varying tastes out there—that Teen Titans Go! will always have an audience.

"The fact that this show, the original series, and the comics are all so successful—despite being so different from each other—really says a lot," he said. "These are characters that people obviously love."