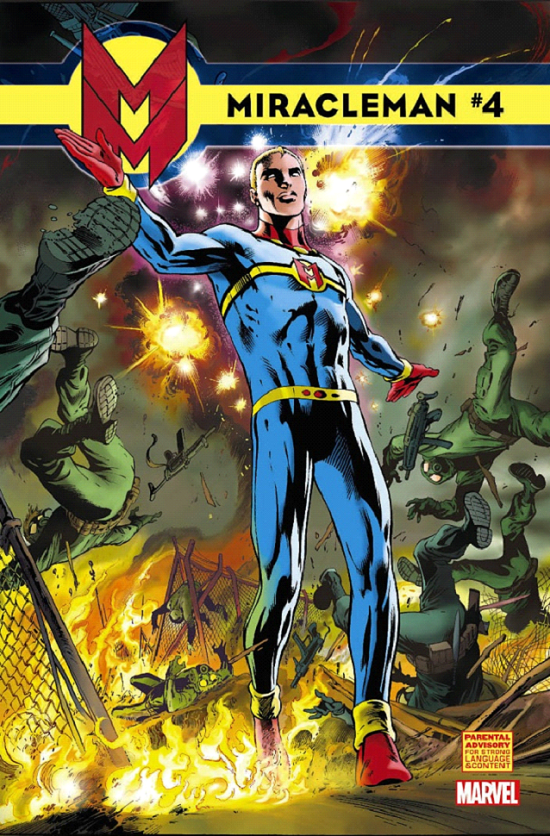 After reading Miracleman issue four, I think I can safely say that I've found where this series hits its stride. The first three issues were full of good ideas with occasionally questionable execution. Here, the ideas are perhaps more interesting, compelling, and engaging in ways that make me even more excited for future issues. As far as execution, I find that there are relatively few negative elements to point out. Starting with the art, the book seems to have transferred from Garry Leach over to Alan Davis almost in its entirety. All four chapters in this issue that deal with Miracleman are drawn and inked by Davis, and Leach's only contribution is what I'm calling a backup story featuring the Warpsmiths. I'm very glad that Davis is providing the primary covers for this series as it is both appropriate given that he produced the interior art and provides an interesting illustration of his growth as an artist. In previous issues, I remarked that I tended to prefer Leach's art as it was more polished and compelling. That is still the case here but Davis is still producing great work which only seems to get better with each chapter. Comparing the cover to the interior art though, one can see how far Davis still had to come to attain his current mastery of the art form. Still, Davis utilizes very interesting and compelling panel layouts, and his art supports the narrative beautifully. I particularly like the use of silhouetted forms placed in a recurring position on the page to represent the government officials commenting on Miracleman's actions. He also is not shying away from challenging angles and is drawing faces with increasingly compelling expressiveness and realism. Miracleman's knowing, almost patronizing glance at Evelyn Cream and Big Ben's tearful visage are particular standouts. I find it odd though that the art in the fourth chapter, "Saturday Morning Pictures," seems to take a significant jump forward in quality. Lines are more polished and clean while there is a subtlety of facial expression here that is quite impressive. Perhaps this has to do with the fact that this chapter was produced in 1984 whereas the preceding three were produced in or prior to July of 1983, a gap in time allowing for this apparent improvement in Davis' skills. At any rate, I very much hope to see more from him as the series progresses. 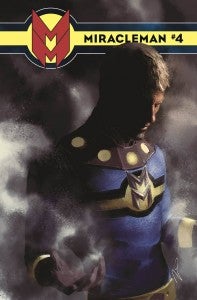 In terms of any issues with the art, the only thing that confused me was the superhero Big Ben's first appearance at the end of the first chapter, "Out of the Dark." As is made apparent from his subsequent representations, he is a white gentleman with a somewhat broad face and indelicate features. When he first appears on-panel and in profile though, he looks as though he is a black man. I infer this from the set of his features and the coloring work which does give him a skin tone which is consistent with that racial/ethnic background and is darker than Miracleman's. This is a minor point though and one which has little bearing on the rest of the book. Otherwise, I have nothing to complain about or criticize, either from Davis' art or from the coloring work by Steve Oliff. In terms of the story and writing, Moore has mercifully toned down and minimized his own third-person narrative captions. As noted in the review of previous issues, Moore is at his best when writing naturalistic dialogue whereas his narrative captions written from the point of view of the omniscient narrator tend to be full of overblown prose occasionally mixing metaphors. Here though, he seems content to let the art and the characters tell the story for the most part and even the questionable narrative captions are not offensively frustrating. I greatly appreciate that he chooses to provide first-person narration from the points of view of Miracleman, his wife Liz, and the superhuman Big Ben. Perhaps it is the fact that he is writing in the characters' voices for these captions that prevents him from veering too far into the melodramatic. I really only have one complain as far as Moore's writing. The second chapter, "Inside Story," starts with a page of agent Evelyn Cream, who happens to be a black man, making his way toward a rendezvous with Miracleman. This page is full of a narration by an unnamed third person or an aspect of Cream's consciousness which seems to be questioning Cream's allegiance to or deviation from his own racial identity. At least that is how it appears to me. I'm not entirely sure how else to take statements like, "you are practically white," "and yet you follow this white loa[, spirit of Haitian voodoo]," and "these antics smack of the daubed face and the ostrich plume." I honestly have no idea what this has to do with the plot or what I'm supposed to make of it. Frankly, knowing that Moore is a white Brit, I'm actually made a bit uncomfortable when he starts making references to "juju," "gris-gris," and what I take to be a self-censored use of the "N word." I'm not sure what qualifies Moore to comment on these subjects or how authentic his observations would be compared to those of someone who actually shared Cream's implied racial/ethnic background and as such question their place in this narrative. In terms of the plot and what the characters learn in this issue, there is quite a lot to cover, too much to fully summarize here. In the most general terms, Michael Moran was not shot to death by Evelyn Cream at the end of the last issue. Rather, he was tranquilized so that he and Cream could uncover the secrets of Miracleman's creation. They make their way (with Moran in his Miracleman form) to a secret bunker, dispatching government agents, traps, bombs, and a superhuman named "Big Ben" on their way, Ben being a later and inferior yield of the Miracleman-creating Project Zarathustra. Inside the bunker, they discover secrets pertaining to Miracleman's creation, the most pertinent points being that Miracleman's memories of his past adventures were all artificially manufactured to resemble comic book stories and that Dr. Emil Gargunza was the mastermind behind his creation. Gargunza was Miracleman's nemesis in the original Anglo Marvelman comics/Miracleman's manufactured memories, which explains why this sets him off and causes him to destroy much of the bunker's equipment. Miracleman and Cream then exit the bunker, leaving behind Big Ben and a mess. 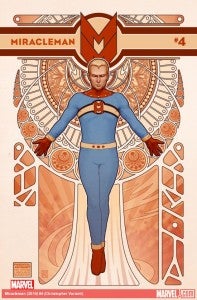